Sh*t On My Hands 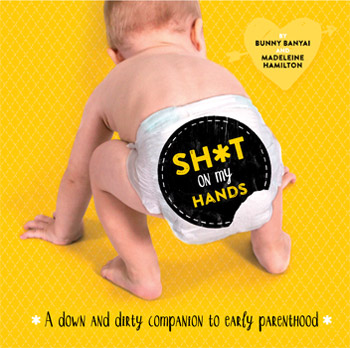 Sh*t On My Hands

There's very little to say about parenting that hasn't already been said a thousand times over, but given the breathtaking catalogue of manuals out there, the authors of Sh*t On My Hands, Bunny Banyai and Madeleine Hamilton, were surprised to find little that really spoke to them when they became parents for the first time. Where was the filth, the fury, the mad love, the guru giving new parents a metaphorical hug and whispering gently -you know, it's pretty hard to really bugger this up'?

Emerging frazzled from their own fog of early parenthood, Bunny and Madeleine decided it was time to tell it like it really is, and Sh*t On My Hands was born. Less What to Expect When You're Expecting and more What the F**k Just Happened? Sh*t On My Hands is a truly hilarious guide to not just getting through parenthood, but actually getting a laugh out of it while you're at it.

Sh*t On My Hands takes on everything from bathing, nappy changing and endless feeding, to single parenting and just staying sane.

There's tips on swaddling your newborn: -Your midwife will wrap your baby tight enough to tie a string around and ship to Greenland… you will never, ever come close to doing with a bunny rug what she can. You must accept this in the same way one accepts one cannot saw open their own abdomen for a truly Empowering Caesarean.'

Thoughts on crying: -Mother Nature; this was the most sophisticated way of allowing babies to communicate that you could think of. Really? After producing seahorses that change colour, you were feeling slightly spent, even a little malicious, and determined that a yowling screech was all the vocabulary an infant needed?'

And of course, there's sh*t: -Given the choice between confronting the excreta of another human being and having one's head gnawed off by a great white shark, it's fair to say a significant majority would take the option that doesn't involve getting their hands dirty.'

The aim of this wonderfully irreverent book is to cast no judgement, tell no lies, and soothe rather than fray, the nerves of anxious first--‐time parents. And remember – you've had house pets. You can do this.

Bunny Banyai lives in St Kilda with her two daughters, stepdaughter, and a partner more adept than most at ponytails and plaits. Working as a copywriter has gifted her with the ability to write wittily about life insurance, kitchen tiles, and steam cleaning. Bunny co-authored Mini Me Melbourne, where she shares some of her favourite kid‐friendly destinations.

Madeleine Hamilton is a part-time historian specialising in pin‐up girls, part‐time writer and full-time mother of Posy, Patience and Saul. She co-authored Mini Me Melbourne and is a regular contributor to www.kidspot.com.au. Madeleine and her mob happily reside in Melbourne's northern suburbs.

Question: What was the main inspiration behind Sh*t On My Hands?

Bunny Banyai: Madeleine and I had been working on a blog of the same name, which was inspired by a acebook post of mine --Upside of being a parent- pure love. Downside- shit on my hands'. Madeleine thought it was a great name for a blog, and asked if I'd be interested in writing it with her. It was less about espousing our ideas on parenting, more of a creative outlet for us while we were in the throes of early parenthood. When you have very small babies, there's not much else to write about. We weren't in a position to start a blog devoted to fine dining or nightclubbing. Babies, on the other hand, proved a rich source of material. People (meaning -our friends') seemed to respond very positively to the blog, and after a couple of years we decided we'd like to try and write a parenting guide.


Question: What was the best part about working together on Sh*t On My Hands?

Bunny Banyai: We work terrifically well together, because we've been doing it for a long time and we know each other's strengths. Madeleine is excellent at refining my bombastic rants and injecting them with a bit of sense and softness. My department is more bringing the black humour to the table. When you need a nice big cauldron of black wit poured all over your work, I'm your gal. The other really wonderful part of it is just having someone there to fill in the parts that you've struggled with. I might be at a loose end as how to tie up a chapter, or vice versa, and one or the other can step in with a suggestion. It might not be what we go with, but it gets the ball rolling when you're having a brain freeze. The whole process of taking a first draft and adding, subtracting, tweaking- it's that much easier when you've got a trusted collaborator.


Question: And, what made the collaboration difficult?

Bunny Banyai: The source material! Finding the time and energy to devote to writing with our respective broods of children was challenging. You don't have the luxury of waiting till inspiration strikes. You have windows of time in which to work, and you're not always ready with fresh ideas. You can't write when there are kids under your feet. It's not like checking Facebook. But as far as there being difficulties collaborating with one another, there really weren't any. We're comfortable enough with one other to be honest when we think something's not working. We're a pretty well-oiled machine these days. I don't think we've ever seriously locked horns over anything. I'm slightly more of a control freak, and Madeleine is very gracious about that.


Question: Why was it important to use Sh*t On My Hands to make even the most frazzled of parents laugh?

Bunny Banyai: We didn't exactly set out to write a funny blog, or a funny book- we just decided from the outset we wanted to make parents feel good. There are so many books out there that just make you feel like you're stuffing things up at every corner. Laughing is a great way to make people feel good. I mean, I've never read a really funny article on parenting and then thought -geez, I hate myself now'. But I've read plenty of earnestly written parenting books that have made me feel like a pretty average person.


Question: Which was your favourite part to write?

Bunny Banyai: Sleep was a big passion of mine, because I got so little of it as a new mum. My babies were sheer misery at night. So I relished the opportunity to let it all hang out when I was writing those chapters. I mean, my daughters nearly killed me with their circadian rhythms. I used to have beautiful peaches and cream skin, and now I look like Dorothy the Dinosaur. Any of the chapters that concern babies tormenting their parents- they were all very enjoyable to write. Very cathartic, and cheaper than a counsellor.

In the spirit of Mother's Day coming up on Sunday 11th May, Aussie mum of 3 and creator of GAIA Natural Baby,...

Dreambaby has launched some very useful pink and blue products to help your little one - whether boy or girl -...

Designed to offer both style and substance - yes they will help to keep children safe around the home as well as...