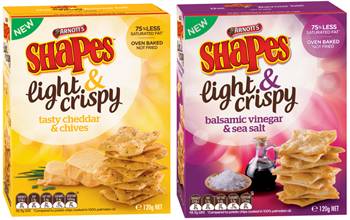 So good… even your conscience will love them

With summer approaching, we're on the lookout for snacks that are better for us - without having to sacrifice taste. Luckily, this beach season, Arnott's Shapes have given us a savoury snack you can feel good about with the introduction of NEW Shapes Light & Crispy; the big Shapes flavour hit on Shapes lightest biscuit yet!

These moreish little morsels are perfect for summer social occasions, or a tasty munch in front of the TV. Shapes Light & Crispy come in four unique flavours, ensuring there's one to suit every flavour craving.

A sweet/caramelised aromatic balsamic vinegar flavour which builds to a salty aftertaste on a crisp, light golden biscuit.

So, now you can enjoy that unique Shapes flavour-hit that you love, with a light and crispy texture, 75% less saturated fat and no artificial flavours or colours. Shapes Light & Crispy… so good, even your conscience will love them!

Shapes Light & Crispy will be available from October 8, 2014 from all major supermarkets. RRP $2.95