A new report shows the pressure Aussie women face today is so great it's impacting on their mental and physical health and emotional wellbeing with as many as 90% saying high expectations placed on them are leading to feelings of stress and inadequacy.

The Liptember Women's Mental Health Report found that women feel expectations are too high for women:
to be thin (92%)
to look young (91%)
to appear glamorous (83%)
to be married or in a serious relationship (63%)

There's not even relief for new mums, with the overwhelming majority (78%) feeling an expectation to look fabulous within weeks of giving birth.

The report found that while virtually all (98%) women feel society places too much pressure on the lives of females in Australia, there is less agreement on the source of this pressure. Over half (53%) feel it comes from the expectations of other people, while 43% say women are too hard on themselves.

And despite the fact that a majority (88%) of Aussie women say they worry about their emotional wellbeing - including 1.5 million that worry about it regularly - only a third have consulted a healthcare professional about it.

The report has been commissioned by Liptember, an annual initiative run in September to raise awareness of, and vital funds for, women's mental health. All funds raised go directly to the Centre for Women's Mental Health - the first gender specific mental health clinic in Australia - and Lifeline Australia.

Unsurprisingly, of the women, 93% surveyed said that they have been stressed at some point in their life, but it's the impact this has on their lives that is most concerning:
three quarters (75%) say they've been affected to such an extent it's caused sleeping problems
almost half (48%) have lacked the energy to go to work or lost their appetite (37%)
and alarmingly, another 44% have found it physically challenging just to get out of bed as a response to stress

Clinical psychologist with the Centre for Women's Mental Health, Dr Naomi Thomas said accumulative stress can have both physical and psychological consequences and unfortunately it isn't surprising to hear many women are not seeking help.

"We commonly see women at the Centre who are struggling with unrealistic high expectations of themselves when they are going through times of great change, such as early motherhood, which can lead to feelings of failure, inadequacy and 'not being good enough'.

"It is important for women to know that help is available, and they don't have to struggle through this on their own," Dr Thomas said

"I've been a Liptember ambassador for three years and I know how important this campaign is. Money raised has provided Lifeline telephone crisis supporters and to established antenatal programs that support new mums at the Centre For Women's Mental Health," Ms Landry said.

Liptember supporters are encourage to purchase the official Liptember lipstick, Burt's Bees Tinted Lip Balm in Rose, from Myer or Lorna Jane stores nationally and wear the lipstick throughout the month of September and gain sponsorship from family and friends.

More information can be found at www.liptember.com.au 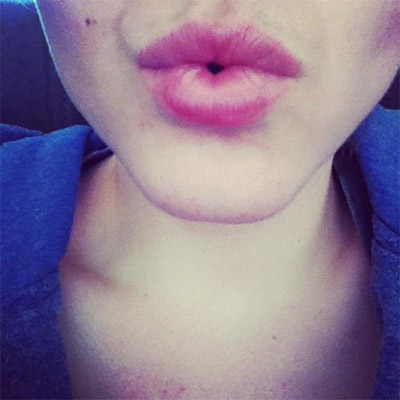 Question: Why did you choose to participate in Liptember?

Rikki Lee Lawrence: I saw the advertisement for Liptember whilst watching a morning show and I thought it was a good thing to participate in because I've have depression and anxiety for just over two years now and because my Mum has anxiety and my cousin had depression which was situational.


Question: Can you talk us through your initial experiences with depression and anxiety?

Rikki Lee Lawrence: I believe it began with a loss of control, in a certain situation; I see it as a form of post-traumatic stress, although it's not diagnosed as that. My depression and anxiety resulted from a situation although my doctor explained that it could be a result of a number of contributing situations, he explained it as every situation being a little drop in a bucket and eventually that bucket overflows.

I experienced a lot of changes at the time, I had left my job because I was bored of what I was doing and I made a change and the change was wrong, obviously. One day at my new workplace I was feeling unwell during a three hour shift and I was told I wasn't able to leave to use the bathroom. Nowadays every time I feel sick, I panic because I think about being sick if I'm stuck in a situation.

I did some research into anxiety and depression and changed the situation I was in, by leaving my workplace but I then was unable to leave the house for three months.


Question: When did you realise you needed to seek professional help?

Rikki Lee Lawrence: I couldn't leave the house, for three months and I knew that wasn't normal. I didn't want to be stuck at home for my whole life and after a trip to the local Bunnings with my Mum I knew I needed to seek professional help. Every time I went to leave the house I felt like I would have a panic attack and whilst at Bunnings I had a panic attack where I was sweating, shaking, wanting to cry and feeling hot. I didn't cry at the time because I knew it would affect my Mum because she is constantly worrying about me and herself. I knew I shouldn't be like that and that's why I began by seeing a doctor.


Question: What treatment and medication do you take?

Rikki Lee Lawrence: I take a generic depression drug called Lexapro; I know there are different drugs but Lexapro works well for me and my psychologists described it as an anxiety solution.


Question: What types of symptoms do you experience?

Rikki Lee Lawrence: My anxiety has gone and my psychologist believes that I learnt to get over the anxiety myself. I do feel depressed occasionally, I don't know why because I don't believe there is anything wrong with my life however it's a brain thing!

When I was having panic attacks I had a general feeling of anxiousness which meant I had sweating palms, hot on the back of the neck and I really felt as if I was going to die almost as if I was having a heart attack. The feeling does pass and I had to tell myself that often.

My last panic attack was at the 1,000 steps on the 6th of April and I felt as if I needed to have the panic attack to be able to go on and I've been fine since then.


Question: How does depression affect you on a daily basis?

Rikki Lee Lawrence: I do feel depressed, I feel sad and useless every now and then, more so when I'm alone. If my partner is away I often feel alone and I know everyone is so busy although I also sometimes think I've done something wrong and that's why people don't want to catch up. I care what other people think, too much, I think.


Question: Do you believe society places too much pressure on women?

Rikki Lee Lawrence: Yes! I think society places too much pressure on women and that may have played a role in my depression. I have body image issues and I know I'm constantly thinking I should look a certain way and analyse what I eat and how I exercise. I know magazines and TV shows do not help with the body images issues!


Question: What advice would you give someone who had recently been diagnosed with depression or anxiety?

Rikki Lee Lawrence: My advice would be to go and see a professional; don't just talk to your friends and family. Talking to people close to you will make you feel better and is a great idea but it is important to talk to a professional as well. When I spoke to a psychologist she explained what I was feeling, back to me and I understood it further as she provided an important insight.

Even if you and your family tell you it's going to be okay, it doesn't just disappear which is why you need to tell a professional.

I also suggest you don't hide how you are feeling, I am a very open person but I don't believe anyone should keep what they are suffering inside. There are a lot of people who harm or kill themselves and no one ever knew what they were experiencing because you cannot tell from looking at someone what they are going through. I was a very happy and loud girl at school and peers often said "she can't have depression" but no one knows that. It's important to speak up so it's never too late; suicide can be prevented and it needs to be talked about.


Question: Does anyone else in your family have depression or anxiety?

Rikki Lee Lawrence: My Mum has had depression and currently suffers from anxiety, she is able to leave the house to go to nearby locations, if she is in control and driving the car. My Mum is happy because she works from home and is better with travelling than she used to be. I believe anxiety and depression go hand in hand because you worry about what's wrong with you and what could happen if you leave the house.


Question: What are your goals for the future, in regards to health?

Rikki Lee Lawrence: I don't want to be depressed anymore; I want to continue with my exercise because that helps with endorphins and being happy! I want to eat healthier and be healthier. Although I don't believe in 'normal' I want to be back to normal although this could be a part of me now. I want to be happy and help others so they don't resort to harming themselves.

Last year I raised $700 for Liptember and I have currently raised $775 this year, my goal is to raise $1,000. I've been wearing my Burt's Bees Tinted Lip Balm in Rose all month!