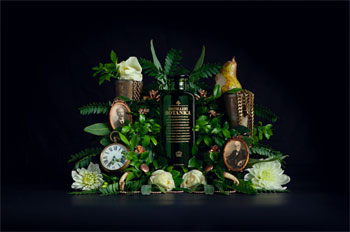 Premium Australian artisan spirit, Distillery Botanica Gin, has partnered with the Royal Botanic Garden Sydney to create the limited-edition -Rather Royal Gin' using botanicals grown in the Garden itself.

Proceeds from sales will go towards the Garden's conservation programs, which preserve our precious biodiversity through seed collection, seed banking and conservation research and training.

Botanicals from the famous Botanic Garden's landmarks, such as the Rose Garden and Spring Walk, were chosen to create a rare collection of 1,000 handcrafted bottles of well-balanced gin which explores the essence of the iconic Sydney destination.

Moore spent months refining the gin through the thousand-year-old technique of enfleurage to cold-extract their perfumes, producing a highly-aromatic, drinkable equivalent of a visit to the Gardens themselves.

Of the gin, Moore said: 'The botanicals that give our gin its unique flavour were grown in the soil of the 200-year-old Royal Botanic Garden Sydney. So when you drink it, you're literally drinking part of the Garden, and for that matter Sydney itself.

'The Garden is Australia's oldest living scientific institution, and if through this limited release gin, we can help raise awareness of their critical conservation work then we're honoured to support this project".

Executive Director of the Botanic Gardens & Centennial Parklands Kim Ellis said: 'Here in Australia, 10 per cent of our native plant species are listed as endangered, with a number of threats to our unique plant life, including climate change, invasive pathogens and habitat destruction.

'We saw a method by which to raise awareness and money for the important conservation we're doing at the Royal Botanic Garden Sydney: Taking Distillery Botanica's Garden Grown Gin philosophy and making it gin that grows the Garden."

Rather Royal Gin is available for RRP$129 from distillerybotanica.com, selected stockists and over the bar at the Botanic Garden Restaurant