After an extended hiatus where they have spent time away from the touring circuit to travel, write and record new music, Pierce Brothers have announced the release of their new single Dentist, a classic, indie-folk number that represents vulnerability during a trying time. The boys have also released a beautiful performance-based music video, and similar to their last single Kanko, the music video was put together with performances filmed in isolation at their homes; a true sign of the times.

Written during the first lockdown of the 2020 COVID-19 pandemic, produced by Jan Skubizeski (John Butler, The Cat Empire), mixed by Phil Threfall (Illy, Ed Sheeran), and mastered by Joe Carra at Crystal Mastering (The Tesky Brothers, The Cat Empire) Dentist has smooth folk hooks, with deep, emotional lyrics. Fans of the classic Australian folk elements found in The Tesky Brothers or Paul Kelly will love this new instalment from one of Australia's favourite duos.

Pierce Brothers' second release in 2020, Dentist is more of a band vibe than their previous single Kanko. "After Kanko, we wanted to explore a deeper sound, and bring some harmonica back into the studio, which is something our recordings have been missing," Jack says about the single. "This song was written during the first lockdown earlier in the year. I really wanted to step up my writing so, along with a friend of mine, I started doing a writing exercise every night. This song came out of one of those exercises. The word was Dentist. What flowed out was a reflection on the vulnerability we feel when things are out of our control and we don't know what's going to happen. That's what the song is ultimately about, vulnerability. The dentist part is just a word."

The video for Dentist was a bit of a process in the time of COVID-19. On the last day before the Stage 4 lockdown was set in place in Melbourne, the boys had to get creative for the film shoot with their friend and collaborator Carl Allison (Dance Monkey, Tones and I). Filmed in Jack's living room, they set up several shots depicting different aspects of the instrumentation in the track, and played them through. "In the time of COVID there is not a whole lot we've been able to do shoot-wise. We couldn't get locations, or extras, or even a real crew, so we had to improvise," Pat recalls. "Carl and I have worked together on lots of projects before, and we have been talking for a while about teaming up again. It was great just getting back into filming beautiful scenes again and it seems fitting to have the clip be representative of this place in time. We included photos of our friends and family we're missing to reflect the fact we were, in fact, stuck at home."

Since Pierce Brothers burst onto the scene with 2014's It's My Fault, Dentist is the second wholly independent release from the duo, preceding Kanko, which was released earlier this year. Both singles are part of a larger body of work being released throughout the rest of 2020 and early 2021. "This year has thrown everyone around like a ragdoll. Tour plans moved time and time again, and going in and out of lockdown," Jack says, "I'm so excited to have so many new songs in the can and ready to release over the summer! It'll be nice to see our friends, family, and fans again when we're allowed back out, and to bring everyone some new material!"


Question: Can you tell us about your new song Dentist?

Jack Pierce: This song was written during the first lockdown earlier in the year. I really wanted to step up my writing so, along with a friend of mine, I started doing a writing exercise every night. This song came out of one of those exercises. The word was Dentist. What flowed out was a reflection on the vulnerability we feel when things are out of our control and we don't know what's going to happen. That's what the song is ultimately about, vulnerability. The dentist part is just a word.

Jack Pierce: I think when we play live I just want people to dance, to feel the emotions as we do and groove out. Man I miss touring!!


Question: When did you guys start creating music together?

Jack Pierce: We started back in school, always playing and jamming around. Once we'd both finished Uni, we started focussing more on this original project we'd been working toward. We took it to the streets to busk and the rest happened all in a blur! 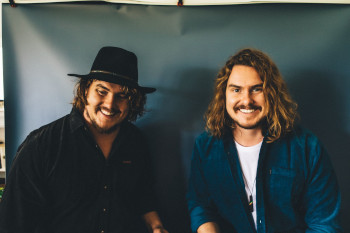 Question: Being twins, do you agree on every new song?

Jack Pierce: Never. We fight constantly. It can be brutal being in the studio with us! Although this time around I think we really hit our stride, bringing new things to the table and working together.

Jack Pierce: I find it difficult being motivated to write new music, so the best thing I've found is to set a time limit and write as much as I can on the topic within that time period. Some of our best stuff comes out when jamming and inspiration hits, however this year we haven't had a lot of that so it was exercises that became the norm.

Jack Pierce: We really fell in love with the early 2000's acoustic surf folk that took us through high school. Jack Johnson, Ben Harper and John Butler were massive inspirations! Touring with Ben Harper is one of the great achievements of our career!

Jack Pierce: A small sports bar attached to the Dorset Gardens Pub near my home town. They call it the Dirty Dorset with good reason!

Jack Pierce: We love collaborating with other artists! We did two songs on this album with other artist. one co-write with Garrett Kato, and one with Jan Skubiszewski. I'd love to collaborate with the Lumineers one day, I love their writing style.

Jack Pierce: Most likely playing the main stage of Colours of Ostrava in 2019. It's a MASSIVE festival in the Czech Republic with over 60,000 people a day. The crowd went absolutely nuts, it was incredible!

Although, we have toured the world with Tash Sultana like 4 times now, and each time was better than the last!!

Jack Pierce: Well I've just become a father so my typical day has changed dramatically! I write when I can, and sleep when I can't!

Jack Pierce: Well, this year there's no telling WHEN we can tour again. But we have a BUNCH of new material coming out over the next few months, and we're cooking up HEAPS of stuff for 2021!