Pete Murray releases his second official single 'If We Never Dance Again' from his forthcoming EP THE NIGHT, which is set for release Friday March 5 via Sony Music Entertainment Australia. Written in LA in May 2019 on his first ever co-writing trip, Pete sat down with writer and producer Morgan Dorr to create the piano-heavy track. On its inception, Pete explains, "Morgan had the first line of the chorus written when I got to his place, which was, "If you never see my face again" and the three chords that played over this. We worked on the song all day and I even cancelled another session that I had booked in just so I could finish this song as it felt like this had so much potential." After returning to Australia, the pair worked together across continents to produce the song you hear today.

Alongside the single, Pete also released a powerful video. Filmed and edited by regular collaborator Mos & Co, Pete explains, "Because the song is powerful and quite epic, I wanted a clip that would enhance this. I didn't want this to be a literal video but more of an abstract one, so that when you watch it, you are more taken away by the beautiful cinematic footage while still keeping mystery at the end." And the chemistry between the couple in the video is unmistakeable. A genuine romance and moment in time captured beautifully, they are partners in real life and were married between shoot days.

Recorded in his hometown of Byron Bay, THE NIGHT EP is inspired by his family and the life experiences that have gotten him to where he is today. It's a poignant, introspective EP that highlights Pete's iconic vocals and rich acoustic sound, and propels Pete further into the quintessential easy-listening sphere that he's well-loved for. The EP is available for pre-order now and is set for release on March 5, delighting fans with an earlier release than originally scheduled.

With the earlier release date, Pete will be playing the new tracks, plus crowd favourites at the upcoming By The C Festival. For more dates and details on where you can hear him live, click here


Question: Can you tell us about your upcoming album 'The Night'?

Pete Murray: The writing process probably began about 2 years ago. In the past I have always written my own songs but this time I went on a trip to LA, Nashville and England to do some co-writing. I found this experience really rewarding and I wrote with some amazing writers.

I had about 20 songs to choose from for this EP, some co-writes and some of my own songs. To cut it down to 6 is always hard but I really felt that all the songs on this EP work together well, lyrically and musically.


Question: What inspired your new single 'If We Never Dance Again'?

Pete Murray: My inspiration was "Don't F*#@ this opportunity up"!:)

This was a co-write that I did in LA with LA local Morgan Dorr. I was introduced to Morgan through our publishing company Sony ATV. Morgan is one of the company's most accomplished songwriters so I was feeling a little pressure to perform while writing with him. Luckily, we connected well and got off to a great start.

At the start of the song I was just going with the flow. Morgan was playing around with the line 'If you never see my face again' on the piano and straight away I could tell this could be a massive chorus if we could get it right. By the end of the day, we pretty much had the whole song finished except the bridge. When I got back to my hotel room I couldn't' stop playing the song. The groove of the verse was really catchy and chorus was the biggest chorus I had ever written. The next day I called my management and told them to cancel another writing session just to go back with Morgan and finish this song as I could feel it had a lot of potential.

Pete Murray: I always hope people will be moved, inspired and passionate about my music.

Pete Murray: Feeler is probably one of my favs to play live and it is also probably one song that best represents my music. It starts with a nice acoustic groove in the verse, has a smooth vocal and has an epic rocking ending with a big sing-a-long chorus. It always gets a great reaction from the crowd.

Pete Murray: I have a great band so the shows will be very dynamic. I'm also expecting a lot of singing along. 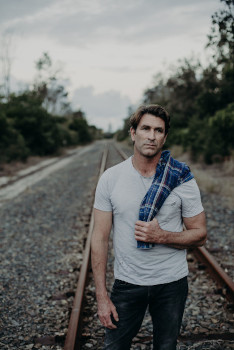 Pete Murray: I do music for a lifestyle so I just keep trying to write songs that a lot of people will love. If this happens then I will continue to playing music around the world.


Question: Which moment in your music career stands out the most?

Pete Murray: I played an early show just before things exploded for me - to about 400 people. I remember driving to the gig that night and there was a line up that went right around the corner and way down the street. It was a massive crowd, easily a couple of thousand people. I was thinking shit someone else is doing a gig tonight and everyone is going to their show and I'll be lucky to get anyone to mine. I was surprised to find out that the line up was for my show. The massive crowd lined up outside were turned away. I have never experienced this before.

I went on stage that night and the vibe in the room was electric. I said to the band that I will do a solo song first and then they can join me. I went on stage and sang the last song on the Feeler album called Ten ft tall. I didn't think anyone would know this song but the crowd sang every word of it. It was so loud and once again I was stunned and had never experienced this before. It was incredible. Experiencing these things for the first time is something I will never forget.

Pete Murray: I good mate of mine Charlie Clarke one day came to my place and said in an excited tone "I'm going to get some guitar lessons, I've always wanted to play so I'm going to do it". I said "that sounds cool, I've never thought about playing guitar but I might do the same". As it turns out Charlie never got a lesson but I did.

Not long after this Charlie moved from Brisbane to the Gold Coast to become a teacher so we didn't see much of each other. A couple of years went by and I rang him one day and said let's catch up because I had something to show him. When we caught up I got out a guitar and played some Neil Young songs. We both loved Neil Young and he was blown away as he didn't know I had even had lessons.

After this catch up I never saw him again as Six months later Charlie died of an aneurism. I still thank him today for being the one who inspired me to learn the guitar.

Pete Murray: Yes there was. I had recorded my independent album 'The Game' and had moved from Brisbane to Melbourne to make things work. I had put a lot of time and effort into playing live and recording but I was at the point where I couldn't even buy myself lunch. Money was very low and it was at this stage that I started to look at my plan B - finishing off my natural medicine studies. It was when I started to enrol again that things started to take off. It's weird how things work. The moment I was about to give music up things changed enough to give me more confidence to keep going.

Pete Murray: Playing live to big crowds and hearing them sing back your own lyrics is pretty cool.

Pete Murray: Chill days at home - Recently I have been spending a lot of time with my family. In the morning we go to the beach and after that we have a coffee then my 3 year old sleeps for a couple of hrs during the middle of the day. During this time I will try to do exercise, interviews or go to the studio. The afternoons, I'll hang with my two sons either take them to soccer training or just hang at home. Dinner later feed the tribe then get them into bed and do the same thing over again the next day.

Pete Murray: I still have a bunch of songs that are ready to go so there will be more new music coming soon.