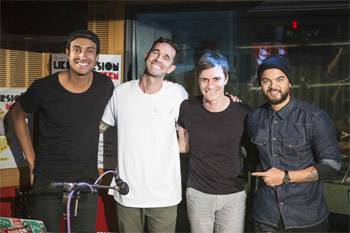 Gold Coast producer Paces (Mikey Perry) appeared on triple j's Like A Version this morning, performing his original track -1993 (No Chill)' with Jess Kent, followed up by a cover of LDRU's -Keeping Score' featuring none other than Aussie singing icon Guy Sebastian.
CHECK OUT PACES AND GUY SEBASTIAN'S PERFORMANCE HERE
Guy Sebastian features on Paces' debut album Vacation, providing vocals for the track -Desert'. Listen to -Desert' here and download on iTunes here.
Paces explains how the collaboration with Guy Sebastian came about:
'Life can be a crazy thing sometimes. I've been working with Guy on some tracks for his album. He's an actual musical genius, he definitely doesn't need my help, he could do everything himself but I think he just doesn't have the time. I learnt so much while working in his studio. Anyway I had this beautiful topline from Alexander Burnett and I'd written the instrumental for it, I just needed to find the right singer. I never in a million years thought I'd get Guy Sebastian on there but like I said, life can be crazy sometimes! And he absolutely crushed it!
We teamed up again to perform on Triple J's 'Like A Version', which has been a huge goal of mine. Guy brought this great energy to the version which really helped make it something unique. I'm so happy the planets aligned and we were able to work together on it."
Guy Sebastian has nothing but praise for Paces:
'I'd been a fan of Mikey's work for a while and reached out to him late last year to write together. We have kept in touch ever since and then Mikey sent -Desert' to me and I put my vocals on the track for his album. It's been awesome getting back in the studio with Mikey for Like A Version and I love what we came up with."
Paces is currently on a national tour in support of Vacation and will be playing the Howler in Melbourne tonight and Oxford Art Factory in Sydney tomorrow night before a run of shows in New Zealand. Featuring guest vocalists and visuals by Sydney artist EGO and dancers on stage, Paces is joined in Australia only by Running Touch, one of triple j Unearthed's 2015 -Most Played Artists,' with his single Courtesy Of. You will also be able to catch Paces live at Splendour in the Grass in July.
Paces' 13-track debut landed at #2 in the iTunes Electroinic charts and ARIA Top 20 on release, and includes collaborations with the likes of Bonde do Rolê, Kučka, Oliver Tank, Rye Rye, and Guy Sebastian. Listen to -Vacation' in full here.
MORE INFO:
FACEBOOK
SOUNDCLOUD
TWITTER
INSTAGRAM