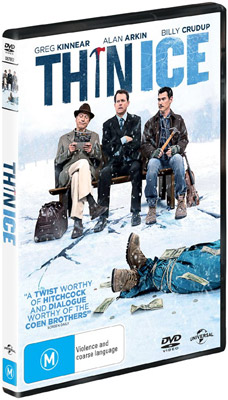 Academy Award nominee Greg Kinnear and Academy Award winner Alan Arkin are back together for the first time since Little Miss Sunshine in the hilarious new quirky comedy, Thin Ice.

Mickey Prohaska is an insurance salesman living and working in frigid Wisconsin. A true salesman, he likes to believe that he can talk anyone in to buying a policy, but the truth is his career has hit the skids, he's struggling to make ends meet, and his divorce from his wife Jo Ann has shaken his confidence.

Dangerously at the end of his rope after his wife throws him out of the house, Mickey learns that an elderly client named Gorvy has an extremely valuable violin in his possession and is not aware it's worth $25,000.

Seeing an easy payday and a solution to his problems, Mickey begins hatching a scheme to get the violin away from Gorvy and into the hands of a violin dealer, but his plan gets more complicated at every turn and eventually goes from difficult to dangerous.