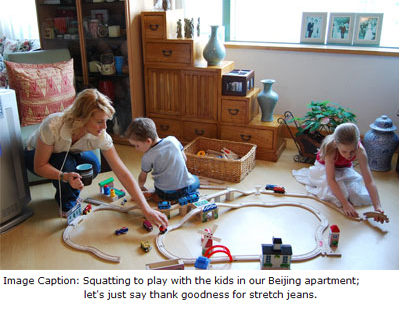 Oh, the hips-and-thighs peril of Western women in China's capital.
Like many modern women, I have spent a lifetime waging a mental battle over my less than perfect body. Many believe that body image--and its propensity to drastically affect the lives of women--is encapsulated inside our heads, thriving in a world of silent distortion. Moving to China for 4 years in 2005, I became even more aware of the truth in this notion.

When I packed up a husband and two small kids and moved to Beijing, I was a size ten to twelve--a size deemed quite slim and trim in Australia. In China, you could have shown cartoons on my arse, it was so enormous. You could have landed jumbo jets on my thighs and don't even mention my acres of love handles and bowlful of jelly belly. Olympian swimmers could have competed in it.

Sifting through the dolls' clothes on the racks in Beijing's clothing stores for women, I would take my then five-year-old daughter with me, and many of the clothes would have fit her. Seriously. These were some teensy women. I could have spanned the chest of many a Chinese woman with one hand and she'd be completely covered. I once tried on a Chinese bra. It fit around my chest but my boobs were pushed so far together, I could have jammed a bunch of lilies in there (bear in mind that cleavage is not a normal physical phenomenon for me).

And forget about knickers. In fact, forget about anything that involved encasing my drive-in-movie-screen derrière. I found A-line skirts that gaped around the waist, but as soon as hips or thighs were involved . . . forget it. The Chinese feature a race of women built like ten-year-old boys--a shape highly envied in the West, which is, of course, jam-packed with curvy bums, hips, thighs, bellies and boobs (capable of holding that bunch of lilies in an upright position).

Truth be told, the size thing in Beijing got mighty depressing after a while. Not only because I could--quite literally--never find clothes to fit, but because I had only just learned to accept my imperfect almost-size-twelve body. And yet here I was suddenly sumo-wrestler-size, in a nation of poppets and petites.

It was with much celebration, then, the day I found jeans at Ya Show market that were big enough to encase my rear end, let alone my thighs (admittedly, they were stretch jeans). Once again I had the 'China problem'--gaping waistband and skin-tight thighs, but this was nothing a small adjustment couldn't fix, and the fact that I could even get my thighs into them was cause for much leaping about. I bought eight pairs on the spot.

Butt covered. Now it was onto the shoes.

In Australia, my feet are a size nine-and-a-bit (a Euro forty-one). This size is, of course, relatively average in our country--perhaps on the larger size of average but then I am 174cm tall so I need some kind of counterbalance down below. Anyway, the point is this: at home, I can buy size nine shoes at every store in town, unless they are sold out to the myriad other size-nine shoe shoppers.

In Beijing, my feet were not normal. They were bordering gargantuan. I suddenly knew how Goofy, Minnie and Mickey Mouse felt, poor buggers. They, too, would have struggled to find shoes for those plates of meat in China, although I'm sure a kindly illustrator could have whipped some up in a pinch. Me, I was not so lucky.

As I arrived in Beijing with quite literally two or three pairs of shoes, I was on the shoe hunt pretty much the moment my clodhoppers landed on Chinese soil. What a low blow this shoe shopping experience became. I mean, really low--like, foot level.

Sheesh. I mean, they're not that huge but in the eyes of the shoe stores of Beijing, it seemed I was endowed with clown shoes for feet. Snow shoes. Skis. After trawling the shoe shops of Wangfujing Street in search of anything even remotely worthy of my enormous slabs, I had the crestfallen experience of being rejected from shop after shop like a banished podiatry heathen. I mean, for goodness sake, I'm surprised I could even get my feet in the door, they were that enormous. I kept tripping over and knocking things from shelves two metres away if I so much as twinkled a toe.

I'll never forget walking into one last shoe shop, bright-eyed and unabashedly hopeful that perhaps this one would have something greater than a size thirty-nine. Mei you, mei you and mei you. Don't have, don't have and don't have.

I'll tell you what I wanted to do with those bloody mei yous.

But more than the mei you humiliation was the looks I got. This last girl, upon the announcement I was searching for a size forty-one shoe, took one look at my face, then unhinged her eyeballs and slowly, ever so steadily, rolled them down my body, over my chin, down my neck, over the lumps of my boobs, down my Olympian swimming pool stomach, over each gargantuan thigh, my knees and ankles to my feet--two massive, flapping platters with nothing but two straps of red leather strung between my colossal Moses-tablet toes.

I followed her eyes myself and looked down at those forlorn sandal-clad slabs, and I honestly don't think I'd seen anything so enormous. Tears sprang to my eyes. I was horrified.

I smiled weakly, fired up my 'reverse mode' warning beep and back out of the store. Then I went home, logged onto www.humungousclodhoppers.com and ordered me some shoes.

I've been home three years now and my plates of meat and love handles are the same size (okay, perhaps a tad pudgier) they were when we first set clodhopper in Beijing. I now feel far from sumo-size, and happily slip my thighs into jeans that aren't marked XXXXXL. For all its size foibles, living in a land of petites flicked a switch somewhere in my long-suffering thin-obsessed brain--size is relative, and accepting our bodies as they are is as much a lesson in self-perception as it is about shunning the bizarre notion that a size six is ideal.

Sure, I'd love to whittle the handles and sand down the slabs and prance around in a bikini with cast-iron belly and thighs, but frankly, not only has middle-age put paid to that possibility--I've really got better things to do with my days than obsess over the number on the tag of my jeans.

Size six? I'm over it. A mega irony that it took living in the land of size-sixes to finally set myself (and my thighs) free. 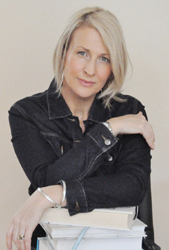 Tania McCartney is an editor, presenter and book-obsessed author of both children's and adult books. As an ACT Ambassador for the National Year of Reading 2012, she is passionate about literacy and children's literature. Tania runs literary site Kids Book Review, writes for several online sites and loves paper, travel, marshmallows and laughing. Beijing Tai Tai, $24.99, is available from www.exislepublishing.com.au.Tania blogs at www.taniamccartney.com

This week Femail is taking part in a virtual blog tour to celebrate the newly released book Beijing Tai Tai - Life, laughter and motherhood in Chinas capital. Below author Tania McCartney shares with us a little excerpt from her book about the miniscule clothing sizes available in Beijing. To follow the tour and see the full schedule click here (link to http://beijingtaitai.com.au/events/)