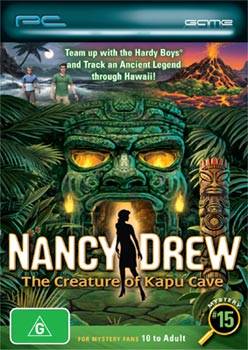 
Nancy Drew: The Creature of Kapu Cave is the fifteenth installment in the award-winning Nancy Drew PC adventure game series.

Now, for the first time ever in a Nancy Drew PC game - assume the role of three different players: Nancy Drew, or Joe or Frank Hardy.

Storyline:
It's not all luaus and leis for Nancy Drew in The Creature of Kapu Cave as she travels to Hawaii as a research assistant for Dr. Quigley Kim. In transit, she runs into the Mapu family, who loan her an SUV and give her directions to Dr. Kim's camp. The Hardy Boys, on a separate covert operation, are also visiting Hawaii and staying at the cultural immersion centre run by the Mapu family.

Before leaving for the camp, Nancy is warned to avoid the secretive Hilihili research compound of Malachi Craven as some believe it's linked to the legend of Kane 'Okala - a man who narrowly escaped being sacrificed to the volcano but was left with a hideous, scarred appearance. When Nancy arrives at Camp Quigley, she discovers that the camp has been ravaged and Dr. Quigley is missing. As her adventure unfolds, Nancy discovers the Kapu or 'forbidden' cave and suspects that something mysterious is hidden behind the Tiki Centennials.