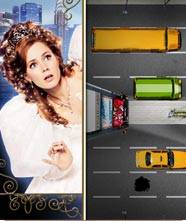 Enchanted is a classic Disney tale about a Princess whose animated world collides with modern day New York City and unexpectedly finds herself in present day Manhattan. As the hard reality of New York City life sets in, Princess Giselle begins to change her views on life, love and happily ever, when she is befriended by handsome no-nonsense divorce lawyer Robert and his young daughter, Morgan. In turn Giselle brings some magic into Robert's and Morgan's life, but can a storybook romance survive in the real world?

More on the Movie Enchanted - Enchanted The Movie

Users must help the Enchanted character to get to the other side of Times Square, while avoiding taxi cabs and trying not to cause a major pile up.