My Mum Says The Strangest Things 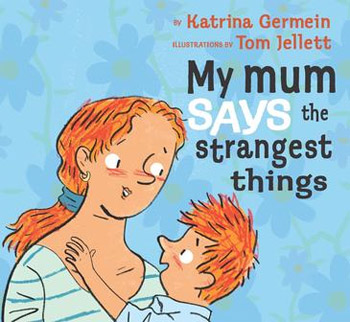 My Mum Says The Strangest Things

From the team that brought you the rip-roaring bestseller My Dad Thinks He's Funny.An affectionate and nostalgic book, perfect for mother's day.

When Mum's busy she says she's run off her feet. When I dawdle, Mum tells me to shake a leg. My mum says the STRANGEST things.

Bestselling picture book author Katrina Germein is published worldwide. Her book My Dad Thinks He s Funny was Highly Commended in the 2011 Prime Minister s Literary Awards and short-listed for children s choice awards across Australia. In 2013, Katrina launched the companion title My Dad Still Thinks He s Funny, as well as the fun, lively tale, Somebody s House. Several of Katrina s stories have been recognised as Notable Books by the Children s Book Council of Australia and have been featured on popular children s television shows such as Play School. Katrina lives in Adelaide with her husband, their three children and an energetic dog named Mango.

Tom Jellett's books have included: Hot Stuff by Margaret Clark, Fuzz the Famous Fly by Emily Rodda, and Australia at the Beach, a picture book by Max Fatchen. Tom now lives in Sydney and works as an illustrator for The Australian.