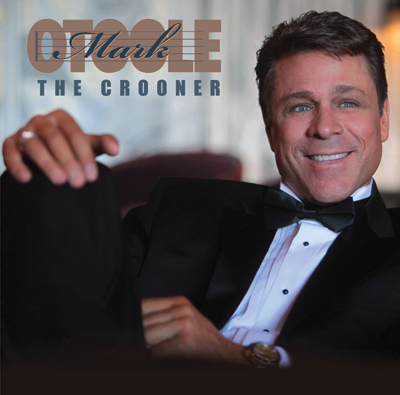 Mark OToole is a much-loved performer who, in two decades in Las Vegas, has covered pop, country, and Top 40 in the best rooms in town. He recorded "The Crooner" after recovering from a diagnosis of terminal Stage IV lymphoma in 2007. While in grueling chemotherapy treatment, he decided he wanted to return to singing the "standards" if he survived; he was seen occasionally during treatment on stage, bald head under a cap and frail, singing the music that was his inspiration - American Popular Song.

OToole brings an undeniable, life-affirming confidence and attitude to the music, with a 21st Century twist on the guys who were his idols: Sinatra, Davis and their ilk. His powerful voice and infectious charisma harken back to the days of legendary crooners.

OToole started singing as a kid, playing leading roles at The Boston Children's Theater. He formed his own band at age 16, performing everywhere he could from "mansions to dives." He honed another skill, impressions, which led to his first big break in show business. After hearing his hilarious impersonation of a matronly grandmother on WBVF-FM in Boston, radio personality Jay Thomas invited OToole to join his show on Power 106 in Hollywood. OToole's in-character interviews of stars such as William Shatner, Woody Harrelson and Geraldo Rivera were an instant hit and OToole was soon heard on 20 major radio stations nationwide. After a few years of his radio show, acting in theater, television and commercials, Mark missed his first love - singing; he listened to a voice in his head which said, "Go to Las Vegas."

Heady years followed his move. OToole appeared on Star Search, where he beat out a five-time winner with his version of Conway Twitty's "It's Only make Believe." Three consecutive Las Vegas "Best Male Vocalist" honors followed, and Mark and his band became the most sought after country band on the Strip and performed non-stop at all the hottest Las Vegas properties including the MGM, The Venetian and The Paris, to name a few.

In July 2007, OToole's life changed when he was told he had only weeks to live. He decided that was unacceptable, started to pray, made his promises and went to work at recovering. After months of intense chemotherapy, Mark is in full remission with a clean bill of health. Now, three shows a week, Mark OToole draws a packed crowd to the Ravello Room at the M Resort and Spa. The crowd, regardless of time of day, close-dances the night away.

"The Crooner" is available for purchase online at www.markotoolemusic.com, on Amazon and at his shows. The digital version will be available soon on iTunes and other major digital distributors.

Visit www.markotoolemusic.com to purchase the CD and learn more about Mark.