As Aussies prepare to head overseas for a midyear break, new research from Commonwealth Bank has revealed that more than one in two (58 per cent) travellers will return home with an unwanted financial souvenir, after blowing their holiday budgets by more than $1,554 per person – a national total of $4.6 billion.

The research revealed relaxed attitudes to travel budgeting is causing money mishaps, with a quarter (26 per cent) of Aussies revealing they don't save any spending money before they go away and one in five (21 per cent) traveling without a holiday budget.

Once on holiday, overspending can easily go unnoticed given only one in three (36 per cent) travellers check in on their spending each day.

Michael Baumann, General Manager Everyday Banking and Payments, Commonwealth Bank, said it might sound obvious but a little research goes a long way with 38 per cent saying the advice they received was very accurate and gave them a good idea of how much money was needed.

"Despite advice from family and friends and budgeting tips and tricks for travellers online, over half (55 per cent) said they made an educated guess when working out their holiday spending money. Even more concerning was that a third (33 per cent) aren't putting aside extra spending money for unexpected expenses or overspend.

"It's always advisable to set aside emergency savings that can easily be accessed or transferred from your mobile banking app to your Travel Money Card when unexpected situations arise. It's also important that travellers are realistic about what they can afford while travelling and keep track of their spending to ensure they are sticking to their holiday budget."

The research revealed holiday budget blunders were also having knock-on effects when travellers returned home, with over a quarter (28 per cent) making sacrifices when they returned home; choosing to stay in on weekends and eat cheaply.

Use downtime to check in on your spending: The final days of a holiday are the easiest to overspend, with two thirds (67 per cent) of Aussies admitting this was when they were most likely to forget about their budgets. Make it easy to check in regularly on your holiday budget by choosing a travel money card that is easily accessible through an online app, like the CommBank Travel Money Card.

Carry a mixed wallet: When travelling overseas, Australians turn to emergency credit cards or savings (78 per cent) or mum and dad (31 per cent of Gen Z travellers) when their holiday budgets run low. In order to avoid phoning home for help, it's important to carry a mixed wallet of local cash, alongside your credit or debit card and a travel money card. Travellers using the CommBank Travel Money Card can reload in real time from their linked transaction and savings accounts.

Lock in exchange rates before you travel: Fluctuating exchange rates are a real concern for Aussies when putting together their holiday budgets (31 per cent) so lock in the exchange rate for up to 13 currencies with the CommBank Travel Money Card so you always know how much you have to spend.

To find out more about CBA's travel offering, including travel insurance and the CommBank Travel Money Card, visit commbank.com.au/travel. 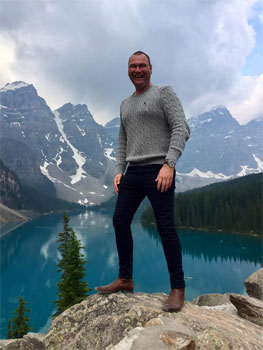 Mark works as a Real Estate Agent and has a big passion for travel. He spends any where between 1-3 months a year overseas and is very much a YOLO traveller when he's away – living life to fullest whilst on holiday. From activities and experiences to fine food and drink, Mark saves money all year round so he can enjoy his time abroad. When Mark returns home however, he is often surprised at how much he has spent beyond his budget. He also doesn't check his expenses whilst away but saves this to when he gets home.


Question: How much did you go over your holiday budget?

Mark McGill: Although I do set a holiday budget, more often than not I do go over it considerably. On my last trip this was around $6,000 to $7,500.


Question: Where did you find/get this extra money?

Mark McGill: Unfortunately the extra money came from savings, which I didn't really want to tap into. I now have a CommBank Travel Money Card which is great because I can lock in exchange rates for multiple foreign currencies before I go. Before I depart I have a clear idea of how much I have to spend, but I'll admit I don't check in on my spending while I'm away, I just worry about paying it off when I get back.


Question: What sacrifices did you make when you got home to ensure you could pay this holiday debt off?

Mark McGill: I worked really hard when I got back so that I could cover what I overspent as soon as possible. It does tend to mean that I can't live it up as much as I normally do, at least for a little while!


Question: Can you talk about where this unallocated holiday spending was done?

Mark McGill: I find experiences are hardest to budget for. Often they are too good to miss out on and I may not be back there again. A good example was when I was in Paris and there was a last-minute cancellation for a fine dining experience at the Eiffel Tower on Valentine's Day. The meal came to over $1,000 but the experience was priceless!


Question: What advice do you have for other Australians to ensure they don't go over their holiday budgets?

Mark McGill: Be realistic about how much you think you will spend, especially if you frequently overshoot your holiday budget like I do. Exchange rates also make budgeting difficult so I now travel with my CommBank Travel Money Card because I can lock in exchange rates before I go. I can also reload funds in real-time wherever I am in the world, which is great in an emergency or if you if don't want to miss out on a once in a lifetime experience.


Question: What method did you put into place to ensure this doesn't happen again?

Mark McGill: I find cash is a much easier way of tracking spending – your budget is whatever is left in your wallet - but personally I don't like to rely solely on carrying cash around and instead carry a mixture of local cash, my credit card and my travel money card.


Question: How will you be escaping Australia's winter, this year?

Mark McGill: In just over a week I'm off to the USA to visit Seattle, San Francisco and Hawaii. It's a trip for work but I've planned in some fun activities while I'm there.


Question: What other holiday adventures are on your list?

Mark McGill: My next major trip is to the Ice Lakes in the arctic circle of Sweden, where I will have precision driver training in Jaguar sports cars. I would say it's the trip of a lifetime, but I have done it once before last February. It was so much fun that I have to go back and do it again!