Soaked in nostalgia, Hold Ya is clever indie pop that showcases LT at her best. Littered with triumphant brass notes and uplifting guitar, the track is buoyed by LT's dreamy voice with that refreshing Aussie pronounciation she's known for. "Hold Ya was written during a pretty turbulent time," explains LT, "It's a story about two people in love, however through the struggles they've endured they begin to drift apart. Neither of them want to leave, but both of them are desperately seeking reassurance that the other wants them to in fact stay and it turns out they both do."

Already notching up some impressive acclaim pre-release, Hold Ya placed LT as a semi-finalist in the International Songwriting Competition and a finalist in the Queensland Music Awards (Blues & Roots category). And LT's last single Overthinker was part of the Slow Down Songs campaign last month, she's one of ten Queensland acts (including Jungle Giants, Tijuana Cartel and more) who have donated their tunes to a Spotify campaign addressing road safety outside schools, alerting drivers when they are five kilometres from a school zone. The Slow Down Songs campaign on behalf of the Australian Road Safety Foundation sees Spotify insert the songs, edited to include the safety message, into the personalised playlists of its Queensland premium users.

Filmed and edited by emerging filmmaker and fellow Cairns local, Chelsey Johnston, with visual effects and animation by Annie Murray from Bigger Picture Animation, LT insights, "Chelsey had the beautiful idea of capturing moments of connection between people. Mothers and daughters, best friends and lovers all connecting in different ways. She messed around with the speed of the track during the filming process, which really signified to me the changes of pace we all experience in any relationship. Relationships change, move, disappear and re-invent themselves all the time and our life can be quite tough if we don't allow them to do that. Sometimes you've got to try harder, and sometimes you have to let go. We chose to film at the Cairns Roller Skating Rink as it's dear to the community and holds so many memories and stories of connection within its 1980s decor."

The UK-born, Papua New Guinea-raised, far north Queensland resident, LT recently rebranded from Leanne Tennant. After the release of her third studio album Happiness Is….. in the troubled year of 2020, Leanne had the space and time to reflect on her career to date – and where she wanted to head in 2021. She explains, "I rarely ever get called by my full name, and I really felt that after such a complicated year it was time to simplify my life and go by the name most know me by and start 2021 with a fresh outlook. LT feels so right to me."

Thrilled to get back to performing live after the year that was, LT recently supported Bernard Fanning and has announced shows at Bearded Lady (Brisbane) on April 17, Brother Jenkins (Cairns) on April 22 and will play the Sunshine Sounds Festival (Eumundi, QLD) on May 1 and 2.

LT: It's a mix of indie and dream pop, filled with trials and triumphs!


Question: Can you tell us about Hold Ya?

LT: Hold Ya is about the strain any relationship goes through when placed under pressure, such as the recent pandemic. It's a song about 2 people drifting apart, however not wanting to give up. It's a song of hope.

LT: When I came to the decision of making a music video for this track, I reached out to an old friend and also work colleague Chelsey Johnson. She had the beautiful idea of capturing moments of connection between people and filming at the Cairns Rollerskating rink as it's dear to the community and has killer 80's aesthetics so it really hones in on that nostalgic vibe. When filming she messed around with the speed of the track during the filming process, which really signified to me the changes of pace we all experience in any relationship. Relationships change, move, disappear and reinvent themselves all the time and our life can be quite tough if we don't allow them to do that. Sometimes you've got to try harder, and sometimes you have to let go. We put a call out on Facebook and got a huge response from people wanting to be a part of it, and on the night the air filled with laughter and people reminiscing about their skating days. It was such a beautiful vibe. Upon completion, I got in touch with my good friend Annie Murray (Bigger Picture Animation) who animated my last clip, Record Stores, and asked if she would animate me in the clip. It worked out really well and it was such fun working in a team of strong, dedicated and driven women.

LT: I always hope that listeners will feel something. Whether it be hope, happiness, or sadness, I hope that it provokes something within. 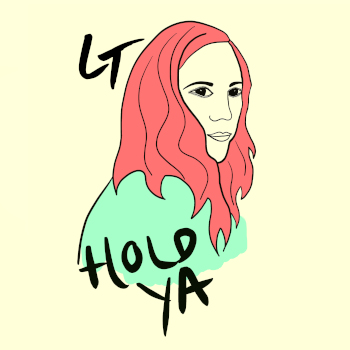 Question: How has moving to Australia influenced your music?

LT: I moved to Australia when I was 10 so my whole songwriting career has been in this country, so mainly my music is about experiences of growing up in Australia.


Question: What can we expect from your upcoming shows?

LT: I love a good laugh, and a bit of banter. I'm stripping things down to solo/duo for a little while until live performances become a little more reliable and consistent. It's always good to get back to your roots and learn how to stand up in front of people again all on your own.

LT: No one particular artist. I listen to loads of different genres so this may seem quite random and certainly not everyone's cup of tea, but I've been getting into a lot of Sleaford Mods this past year. Love them.

LT: I remember seeing the Waifs live at the Tanks in Cairns and one of them was heavily pregnant, sitting on a stool playing the show, sweating profusely and killing it. I remember feeling so inspired and it was the pivotal moment for me to see that it is possible to be a woman, a mother, and still have a career in music.

LT: Jack River or The Middle Kids. I also helped facilitate a workshop with Clea the other day so I'd love to work together on something with her sometime soon.

LT: Getting to meet people I admire, and being surrounded by music.


Question: Can you tell us about the Queensland Music Awards?

LT: It kind of feels like one big work Christmas party. It's not often we all get to hang out in one place, at one time, so that's really special. I always leave feeling incredibly inspired and generally cry at least once. Ha

LT: Wake up, change nappies, make school lunches, get everyone ready to drop to school / daycare, then get to work myself. Finish work, pick the kids up, feed everybody, cook dinner, put everyone to bed. Then sit down and get on top of emails, or grant writing, or promo stuff, then sit and stare at a wall incredibly exhausted! Some days if my energy levels are high, once I put the kids to bed, I might get a chance to muck around on a melody momentarily and start the beginnings of a song. Rinse, repeat.