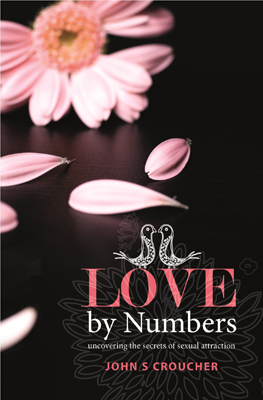 Love by Numbers: uncovering the secrets of sexual attraction is a book by John S Croucher, a Professor of Statistics at Macquarie Graduate School of Management, which compares and discusses hundreds of surveys and studies from around the world teasing out fascinating facts, trends and observations on dating, relationships and sex.

Shedding light on the universal conundrum that is love and relationships, the book covers everything from speed dating, kissing and marriage to pornography, fantasies and cougars to infidelity, secrets and lies.

With surprising statistics on dating (25% of surveyed British women say they do not wear underwear when on a special date), to shocking facts about sex (During 2006, 76 million people around the world typed in the single word 'sex' into a search engine), John's enlightening book will amaze, amuse and inspire all those who have ever fallen in love or find themselves frustrated with singleness.

Professor John Croucher is the Professor of Statistics at Macquarie Graduate School of Management, his research contributes to the application of quantitative methods to business and management and helps entrepreneurs, managers and employers grasp the complexity of the practical application of mathematics and statistics to the real world.

John has been a major contributor to management education through his 20 books, 120 research papers and over 1000 newspaper articles. His teaching skills are exemplified by his six national and international awards for outstanding teaching. John is widely sought after as a consultant by business and industry where he provides his expertise to solve the problems of management.

Question: What inspired you to write Love by Numbers?

Professor John Croucher: I was inspired mainly by the encouragement of many emails and other correspondence I have received to produce such a volume. For over 11 years I have written the popular Number Crunch column that appears each week in the Good Weekend section of both the Sydney Morning Herald and The Age in Melbourne. Of the thousands of facts and findings I have published during this time, it is undoubtedly those involving anything to do with sex and relationships that attract the most attention. And so this book is a collection of all the interesting things I have uncovered - plus a lot more.


Question: Can you share with us some of the fascinating facts you discovered from your research of surveys and studies?

Professor John Croucher: Examples of fascinating findings include:
45% of the women participants in speed-dating and 22% of the men come to a decision within the first 30 seconds.
55% of Australian men said they would dump a girlfriend if she became too fat, while 19% felt that it was acceptable for any break up to be conveyed via email, phone, messaging service or text.
It generally takes between 90 seconds and 4 minutes to decide if you're attracted to someone and begin to flirt with them.
A woman who continually crosses and uncrosses her legs, or stands with her legs slightly more apart than usual when facing a male, is giving off signals of attraction. Dangling her shoe off her foot with her crossed leg, flicking her hair and having dilated pupils are also excellent signs of sexual interest.
Winners of various polls on the worst pick-up lines include: "What is your star sign?" and "Do you come here often?".
The most common mistake people make when flirting is maintaining too much eye contact.
75% of surveyed people said they would not date a person again if the first kiss was a disaster. 90% remember their first kiss and who they had it with.
90% of holiday romances are over within a week of returning home. Sometimes because of a waiting spouse or partner.
21% of married women say they would like longer-lasting sex while only 7% of married men feel the same way.
58% of couples married less than 3 years find their sex life very exciting. After 10 years this drops to 29%.
The most likely time for a couple to have sex is 10.30pm.
68% of surveyed men felt that a woman's invitation for coffee after a date is really an invitation to have sex.


Question: What were the main observations you made in regards to relationships and sex?

Professor John Croucher: When and whether to have sex has been an ongoing thorny issue for centuries and it will always be so. In one survey, 80% of women said that if they slept with a man on the first date then they would not expect to see him again. Some other interesting findings include:
The average time sex lasts in Thailand is 10 minutes, the world's shortest. In Brazil it is 30 minutes, the longest.
70% of surveyed Britons aged 65 and over wished they had more sex when they were younger while 21% wished they had married someone else.
When a man has lots of sex, his beard grows more rapidly than when he abstains.
Divorced men in their 40s in Australia are the most likely to have visited a prostitute.
Women aged in their early thirties are the group more likely to fantasise about having sex with someone other than their current partner.
At 75 years of age and older, 40% of American men claim to be sexually active compared to just 17% of women.
23% of surveyed Australian men with a partner said they would most like to change her sexual appetite, 26% her attitude/moodiness, 9% her looks, 8% her nagging and 4% her intelligence.


Question: Who did you write Love by Numbers for?

Professor John Croucher: The book is written basically for everyone who is interested in romance - those looking for love, those who have already found it and those who feel like giving up. If I had to choose, I think the book will appeal especially for women since there is an emphasis on female opinions, feelings and statistics. The contents will provide the basis for much debate and discussions in the office, at home and among friends. It also has a great cover!


Question: Can you talk about what you learnt, when researching infidelity, secrets and lies within a relationship?

Professor John Croucher: I learned that while there are many ways in which you can cheat on a partner, but there is also a growing number of hi-tech ways in which they can be caught. This can be as simple as finding sexy text messages or photos on your partner's mobile (usually uncovered while your partner is in the shower) to GPS tracking devices hidden underneath a car that can be used to see in real time to not only determine where a car is, but where it has been and how long it has been there. Such a cunning device is currently being used in divorce proceedings. The book also discusses the tell-tale signs that your partner is lying to you and whether a relationship can survive, and how well, after infidelity.

One intriguing finding was that women must be careful as to which females they introduce to their boyfriend, since 38% of men have fantasised about having sex with their partner's girlfriends and a further 25% have such thoughts regularly.