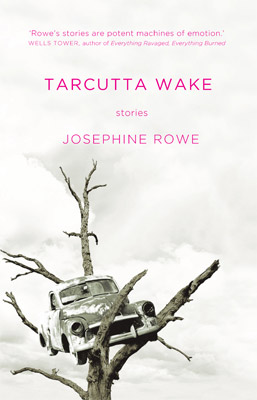 'The stories in Tarcutta Wake are potent machines of emotion, miraculous for the human vastnesses they sound by the sparest and surest of means.' Wells Tower

Melbourne-based author Josephine Rowe's collection of beautifully wrought, bittersweet stories, Tarcutta Wake, announces the arrival of an exciting new talent on the Australian literary scene. In short vignettes and longer stories, Rowe explores the idea of things that are left behind: souvenirs, scars, and prejudice.

A mother moves north with her young children, who watch her and try to decipher her buried grief. Two photographers document a nation's guilt in pictures of its people's hands. An underground club in Western Australia plays jazz to nostalgic patrons dreaming of America's Deep South. A young woman struggles to define herself among the litter of objects an ex-lover has left behind.

Treacherous
Her clavicles. Once they jutted out so far you couldn't
look at them without imagining treacherous mountain
passes covered in snow, tiny armies marching down
either side to a war in her suprasternal notch. Then she
fleshed out a bit, and the war was over (more or less).

In exploring the significance of relics, be they objects that have survived the passage of time or customs whose original context no longer exists, Rowe captures everyday life in restrained poetic prose, merging themes of collective memory and guilt, permanence and impermanence, and inherited beliefs.

For Rowe, writing in a concise way is instinctual, stemming from her background in poetry. As she states, 'my approach to the short story is very similar to my approach to the poem, in that it is a line by line process - every line needs to hold its own weight and justify its existence. So much of what I do is "un-writing"; paring back, condensing; attempting to contain the greatest possible substance within the smallest possible space.'

Following on from the success of The Rest is Weight by Jennifer Mills (July 2012), Tarcutta Wake is the second of several exciting contemporary short fiction collections that UQP will publish each year.

Josephine Rowe has published two collections of short stories: How a Moth Becomes a Boat and East of Here, Close to Water. Her poetry and fiction have also appeared in Meanjin, Overland, The Iowa Review, Griffith Review, Best Australian Stories and Best Australian Poems. In 2011, she was a participant of the prestigious University of Iowa's International Writing Program (whose alumni include Alice Pung and John Kinsella).