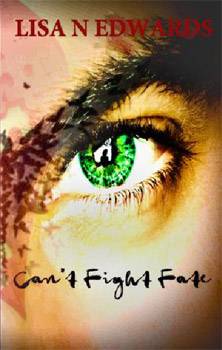 Can the words of a Psychic influence your thoughts? Your Choices? Your Destiny?

In the new book, Can't Find Fate (Vivid Publishing $27.95), author Lisa N Edwards tells the story of Nikki, a spirited Aussie girl who thought she had her life planned out – start a career, find a man, and have a family. Life seemed simple, until she accompanies her friend to a psychic which changes her life forever. The psychic describes her perfect soul mate - Mr Hollywood, a man with crystal green eyes. Flash forward 17 years, Nikki's career as a Hollywood Entertainment Lawyer has taken off, and the green eyed man is standing right in front of her. The words of the psychic are imprinted in her mind...

Nikki can't chase him, and she can't tell him what she knows, or should she just ignore the warnings to get what she wants?

With her best friend, Siobhan, by her side, they navigate their way through this supposedly predestined life. Nikki can try, but she can't fight fate…

Lisa N Edwards sold her Melbourne Entertainment Agency - VisionsMCP in December 2013 to pursue her dreams. After successfully auditioning and completing NIDA's Presenter Course in 2010, and years of acting training, she focused her sights on Hollywood and travelled back and forwards from Australia for nearly 4 years, pausing momentarily to concentrate on her writing projects. During this time, she also co-wrote an award-winning screenplay. After waiting for the right moment to write Can't Fight Fate, Lisa decided that there is never a -right' time, and so she made it happen. The next book in the three-part series, Chasing Butterflies, will be released soon. For more information visit www.lisanedwards.com.au

Question: What inspired you to sell you entertainment agency to pursue your dreams?

Lisa N Edwards: The day I received my acceptance letter to NIDA, I thought maybe I could do everything, but that was one of the hardest years of my life - NIDA is hard. Then there was the daily struggles watching everyone else do what I wanted to do. It's hard when you are the Agent to submit yourself for work, even if I auditioned successfully; the whispers were rife that I was getting some sort of special treatment, or on the other hand stealing the work from my actors. The funniest situation was when a 50-something Male said those exact words to me, in that moment, he actually did me a favour because that is when I decided to stop hiding and sell my business, and jump into the shark pool with him, not that anyone would ever cast me in their film as a 50-something MALE! Being an Agent was never what I wanted to do, sure it's a great job, just for someone else, and I am grateful for all the opportunities it gave me. From a very young age, I wanted to act, write and make movies. When some of my actors found out I was selling, they told me I was a great Agent, and I probably was, I always put 110% into anything I do, but being an Agent was not who I wanted to be.


Question: How did that lead you to write this book?

Lisa N Edwards: Part of my dream is to produce movies, if you watch the film credits you will notice a common theme that most movies were first books. The reason for this is it's a safe bet for producers as there film will already have a loyal following.


Question: Who did you write Can't Fight Fate for?

Lisa N Edwards: Can't Fight Fate was written for everyone who has ever believed in the words of someone else, rather than walking their own path. I am asking the readers to think if they were in the same situation would they ever second guess a decision because of the words of a psychic? Do psychics make your choices easier, like choosing the easy road, because of what you believe someone else told you was your path?


Question: What was the best part about creating the character of Nikki?

Lisa N Edwards: The best part was creating a character I thought people could relate to. Someone they could be friends with, she has little eccentricities that make her unique. When I wrote Nikki, I drew on a lot of my own feelings and personal experiences; the psychic reading is my actual reading from when I was 21. Nikki is a complex character she appears to have the world at her feet, her partner is a Dr and she doesn't need to work, but it doesn't make her happy. She is clumsy and often jumps into situations without thinking. She also listens to the voices in her head that circle with conflicting thoughts.


Question: What research was involved in Can't Fight Fate?

Lisa N Edwards: This is a book I spoke to people about for over 10years, I got their perspective on ideas and whether or not it sounded too way out there to believe. For Character development I read psychology journals and articles, to add depth to the characters emotions. These enabled me to build a unique friendship within the pages between Nikki and Siobhan, one that never ceases to amaze the other.


Question: What's next for the series?

Lisa N Edwards: The next book in the trilogy is Chasing Butterflies, which starts from the moment Can't Fight Fate finishes. I can't give too much away without telling you how the first book finishes. I personally think Chasing Butterflies is better book but I will let the readers decide. Just when you think you know where it's going, you don't. Some of the questions from the first book get answered, but then you will have more questions as the story progresses. For the answers to those questions you'll need to wait for the final book in the Trilogy – Seed of the Sunflower.