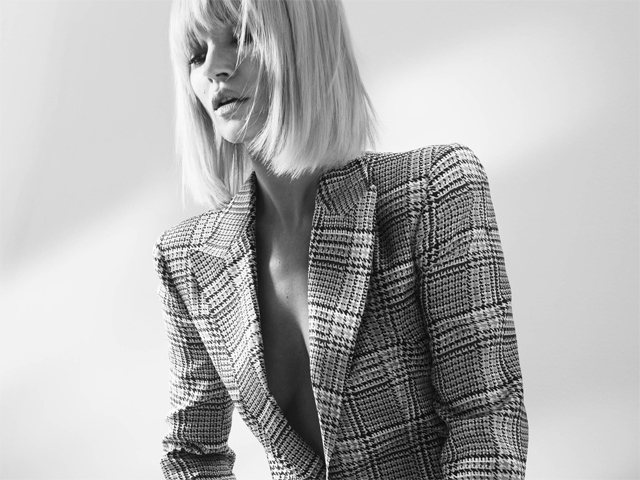 Light and personality. The new advertising campaign, shot by photographers Mert Alas & Marcus Piggott, who have already collaborated with Giorgio Armani in the past, encapsulates the vibrant, incandescent, iridescent minimalism that is the essential Armani style"a language in which the outfit becomes one with the person"in pure and concentrated frames, where even black and white impart a sense of colour. Bold lights cut through the surrounding backdrop reducing it to an essential and luxurious space, accentuating the emerging figure of Kate Moss. A first-time interpreter of the Armani style to which her feisty, free-spirited sensual presence is brought to bear, Kate Moss stands out as a woman of singular beauty, whose personality and energy decisively set her apart from the fleeting fads of the moment. Alongside her a supporting male cast with Daisuke Ueda and Thijs Stenneberg, model the menswear selection of the Giorgio Armani Fall/Winter 2019/20 Collection, presented for the first time together with the womenswear collection, last February at Armani/Silos. Each picture is a unique portrait where the outfits in infinite hues of blue, with accompanying gestures and movements, trace a stark outline of essential and polished elegance over figures bursting with character.