Jed Zarb Stay For a While Interview With the release of his brand-new single 'Stay for a while', Jed Zarb has proven once more that he has no intention of going anywhere unless it's up the country charts. His newest offering comes off the back of both 'Mountain Man' and 'Battle Scarred Guitar' hitting the Country Songs Top 40 – at No.8 and No.7 respectively – while 'Hillbilly Cider' rose to No.1 on the iTunes Country Single Chart, No.1 on the Country Songs Top 40, No.1 on the Australian Country Radio Chart and was also the most requested song on the Australian Country Songwriters Show.

Despite the success of his last three releases, Zarb says that 'this is much more than just another country song.' It delves into more existential questions and philosophies and was born from Zarb's jams at home with his son, Dylan, who came up with the original riff. 'The melody instantly brought images and feelings of magic and the ethereal,' says Zarb, 'and that melody became the basis for the chorus.'

The track was recorded and pre-produced at Zarb's home studio in the Blue Mountains before further tracking and mixing at Ebony and Ivory Studios by engineer Saul Santilli, who also helped produce Zarb's previous three tracks.

The song's narrative explores the idea of the feminine power of the universe and her guidance and influence over the creative process and life path. 'Some call her lady luck, some even call her god,' says Zarb, 'but to me she is the force that directly connects you to the universal power – when she is with you the world synchronises and it all falls into place.' Zarb is quick to point out that 'as fast as she comes along, she can leave too, and the feeling of connection with her is always a torrid love affair with a longing for her to stay.'

Co-written by Dylan Burrows and Warren H Williams, a friend and fellow musician, 'Stay for a While' has a distinctly Celtic feel to it, much more so than Zarb's previous releases, and will appeal to a wide audience. Zarb is no stranger to entertaining an audience either, having played Boyup Brook in February 2020 as well as Music in the Mulga, Ballina Country Music Festival, Groundwater Country Music Festival and Ballina Food and Wine Festival, all of which took place in 2019.

And though we may be waiting a while until Zarb can get out on the road once more, take solace in the knowledge that you can stay at home for a while with 'Stay for a While' on repeat. In these uncertain times, you can be certain that it will be climbing the charts soon.

Jed Zarb : Australian folk country with a touch of bluegrass. The Celtic connection.


Question: Can you tell us about "'Stay for a while"?

Jed Zarb : A song that I wrote with my son Dylan and Country Music Legend Warren H Williams. Dylan came up with the catalyst riff, I wrote the lyrics and Warren H helped refine the melody and chord structure. It's a song about the force of the universe that I like to call Ethereal Goddess, a force that we all wish to harness if we are lucky enough to have her come to visit in our life and goals. When she is with you, it feels like a fleeting torrid love affair.


Question: What inspired your new song?

Jed Zarb : An a original guitar riff that my 20 year old musician son showed me. The melody of that riff placed me in a mystical magical mindset, funnily enough, something like the Shrek set lol.

Jed Zarb : That the universal law of attraction exists. Don't give up on your dreams. 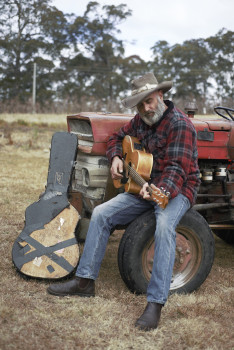 Jed Zarb : I really love both with a passion for different reasons. Live is that connection with music lovers and the brotherhood/sisterhood of musicians making music. Recording is that immense satisfaction of unleashing your creativity on an audio canvas and hearing the results.

Jed Zarb : I was only nineteen by Red Gum. I served in the RAAF from 1983 to 1994. The song was an anthem for us and it really goes to the heart of life as a Vietnam combatant and war veteran. I play it to show my respect and remembrance to those who have served in theatre.


Question: Can we expect a tour once COVID-19 has passed?

Jed Zarb : I'd love to go on tour with a major artist as a support act. Perhaps someone like John Williamson or Sara Storer. Not only do I love their music but feel an affinity with their kind of followers.

Jed Zarb : My Grandmother if she were still living. She was my major creative support growing up and taught me to sing. I think she would be proud.

Jed Zarb : The rush that I get when the lyrics flow. The outcome is always something to look forward to.

Jed Zarb : Mostly my peers and also the legends of Australian country music. I listen to Australian Country playlists but no artist in particular.

Jed Zarb : My first memory of wanting to be a career musician was really early, it was in the first season of Hey Hey it's Saturday when it was televised on Saturday day time. I saw Wilbur Wild and new that I wanted to be a Sax player and nothing else.

Jed Zarb : Once or twice but I quickly realise that I truly am doing what I am meant to be doing and couldn't imagine doing anything else.

Jed Zarb : The people I have met and the amazing places that music has taken me.

Jed Zarb : An Album that will include "Stay for a while" as well as my previous single release "Mountain Man" Hillbilly Cider" and "Battle Scarred Guitar". I have written and pre produced a bunch of new songs during lockdown and hope to have an Album up later this year.