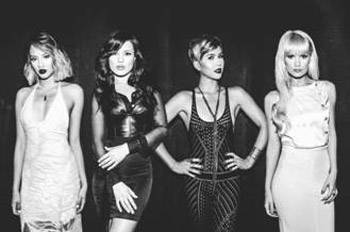 Pop sensations G.R.L. will return to Australia in April to support breakthrough pop phenomenon Meghan Trainor on the Australian leg of her That Bass tour.

Written by Lukasz Gottwald, Theron Thomas, Timothy Thomas and Henry Walter and produced by Dr. Luke and Cirkut, their current single -Lighthouse' is a touching tribute to G.R.L.'s Simone Battle who passed away tragically last year.

Directed by Daniel Carberry, the video is an incredible yet emotional representation of the song and is available to view here: http://smarturl.it/LighthouseVid

2014 saw G.R.L. launch in to the spotlight with the release of their four-times-platinum hit single -Ugly Heart' which hit number two on the ARIA singles chart, following the blockbuster success in their co-starring role on -Wild Wild Love' with Pitbull and the release of their self-titled EP.

Their return to Australia as special guests for Meghan Trainor will mark their debut Australian shows, where they will perform live in Sydney on Monday April 27 and Melbourne on Thursday April 30.