It's April 1945. As the Allies make their final push in the European Theatre, Sergeant Wardaddy commands the eponymous Sherman tank and her five-man crew on a deadly mission behind enemy lines in one of the most devastating wars in history. When the tank's gunner is killed in battle, the recently enlisted Army clerk, Norman Ellison (Lerman), joins the platoon as his replacement who, it transpires, has never even seen the inside of a tank before let alone experienced the ravages of war. Outnumbered and outgunned, Wardaddy and his men face overwhelming odds in their heroic attempts to strike at the heart of Nazi Germany.

Praised by The Age for its 'shuddering physicality" and hailed as a 'visceral screen experience" by the Herald Sun, Fury exposes the harsh realities of war and what it can do to the souls of ordinary men. With an uncanny ability to recreate the horror and brutality of conflict with an unflinching intensity, Fury stresses that in the depths of war, each man is only as strong as the man beside him.

On an ordinary day, Gerry Lane and his family find their quiet drive interrupted by urban gridlock. An...

As the Allies make their final push in the European Theatre, a battle-hardened army sergeant named Wardaddy... A Mighty Heart is the big screen adaptation by Michael Wiinterbottom (The Road to Guantanamo). Angelina Jolie...

Brad Pitt remains one of Hollywood's golden boys, that ultra cool movie star who exudes boyish enthusiasm on and...

Burn After Reading; The new film from the Coen Brothers (No Country For Old Men) is a wickedly funny spy caper...

Come behind the scenes of the epic journey Troy with Eric Bana & Brad Pitt.

This time around, Oceans was shot in Europe, and Pitt says it is tough to compare these European locales to Vegas. 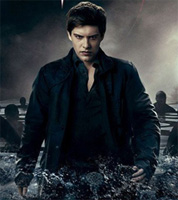 Young Aussie actor Xavier Samuel is getting a lot of attention these days, first in the award-winning Aussie...