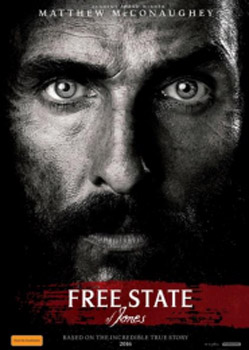 Synopsis: Written and directed by four-time Academy Award® nominee Gary Ross and starring Academy Award® winner Matthew McConaughey, Free State Of Jones is an epic action-drama set during the Civil War about one man's defiance that led to a revolution on and off the battlefield.

Free State Of Jones is based on the thrilling and moving true story of Newt Knight, a soldier who, in a time of conflict that divided a nation, fled the battlefields after being disillusioned by the horrors of war. Banding together with other small farmers and local slaves, Knight built an extraordinary armed rebellion against the Confederacy that led Jones County, Mississippi to secede, creating a Free State of Jones. Knight continued his struggle into Reconstruction, distinguishing him as a compelling figure of defiance long beyond the War.