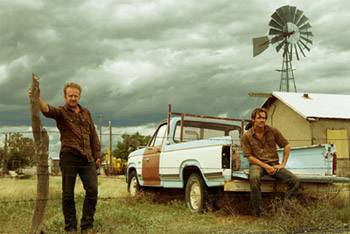 Synopsis: After showing to critical acclaim at the Cannes Un Certain Regard section and ahead of its Australian release, Madman Entertainment is pleased to release the trailer for Hell or High Water.

After years of estrangement, Texan brothers Toby (Chris Pine) and Tanner (Ben Foster) decide to rob the branches of the bank threatening to foreclose on their family land. For them, the hold-ups are part of a last-ditch scheme to take back a future that was stolen from under them. Vengeance seems to be theirs until they find themselves on the radar of Marcus (Jeff Bridges), a Ranger looking for one last grand pursuit on the eve of his retirement, and his partner Alberto (Gil Birmingham). As the brothers plot a final bank heist to complete their scheme, and with the Rangers on their heels, a murderous showdown looms.

Hell or High Water is helmed by British director, David Mackenzie, a follow up to his revered and award winning film, Starred Up and includes a powerful and tension filled score from Nick Cave & Warren Ellis.

Hell or High Water
Release Date: Distributed by Madman Entertainment, the film is due for release in Australia in the coming months.
Trailer: YouTube