5 Places Around the Globe to Visit Before They Disappear Increased global warming is having profound effects on natural habitats and tourist destinations around the world - so much so, that some might soon disappear altogether

Some of the world's most beautiful destinations - from Australia's Great Barrier Reef, to the once vast ice glaciers of the Rocky Mountains - are under threat of extinction. If no urgent measures are taken against global warming, time will soon run out for some of the most unique places on earth.

Smart Lemur, a travel site that offers smart travel advice, has selected a list of destinations to see before they disappear altogether:

Venice, Italy
Venice, a city in northeastern Italy, celebrated for its contributions to art and architecture, is situated across a group of 118 small islands separated by canals and linked by over 400 bridges. In October of 2018, storms hit the area and a reported 75% of the city was underwater with many tourist destinations closed, or unreachable. Venice, one of the most unique and romantic destinations on earth, might soon be underwater - and sites such as St Mark's Basilica, the Doge's Palace, the Grand Canal, and the Piazza San Marco could soon be gone forever.

The Maldives, Indian Ocean
The Maldives, rising just 1.8m above the Indian Ocean southwest of India is officially the lowest country on earth. A favorite with honeymooners, eco tourists and backpackers, this collection of 1,192 coral islands offers visitors a real taste of paradise on earth, but is in serious risk of being washed away by rising sea levels. If the effects of global warming can't be slowed in the near future, the Maldives will incur serious reef damage and land erosion, and it's predicted that it could disappear altogether by the end of the century. 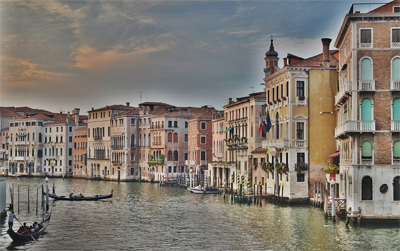 The Dead Sea
Experiencing a true feeling of weightlessness and buoyancy has been the ambition of visitors to the saltiest lake on the planet for many years, but this could soon prove to be an impossible task. The lowest point on earth - at 431m below sea level - is decreasing due to a reduction in the flow of water to its main tributary, the Jordan River. Current rates mean that the Dead Sea is currently losing 1m per year and it's predicted that it may disappear entirely by 2050.

Glacier National Park, Montana
The Glacier National Park in Montana Rocky Mountains, northwestern USA, has long provided visitors with breathtaking scenery, trekking opportunities and an all-round retreat, but one natural feature is under real threat from rising temperatures. The park, dubbed the 'Crown of the Continent,' is losing its glaciers, with only 25 of the original 150 left intact. The park has been fighting a losing battle and is now resided to the fact that it's too late to save the remaining glaciers, with scientists predicting them to be gone completely by 2030.

French Polynesia, Pacific Ocean
French Polynesia is made up of 118 dispersed islands and atolls covering an area of more than 2,000 kilometers in the South Pacific Ocean, including the islands of Bora Bora, Tahiti and Kiribati. This extremely popular tropical tourist destination is under extreme pressure from rising sea levels and it's predicted that the majority of the low-lying islands will disappear altogether by the end of the century.