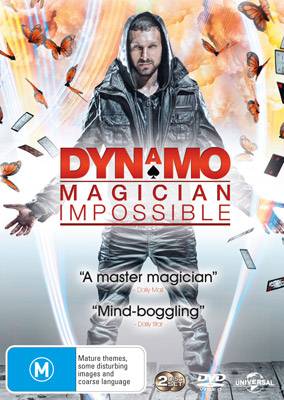 Performing spectacular tricks and stunts beyond the realms of possibility, Dynamo is the most exciting British magician to emerge in decades. Combining elements of dance and hip-hop culture with his mind-blowing tricks, he has taken his talent from the streets of the UK to the celebrity circuits, working with the likes of Will Smith and Jay Z.

Dynamo: Magician Impossible is the story of an ordinary boy from Bradford, England, who just happens to astound everyone that he meets with his card-handling and jaw-dropping magic skills. Growing up on Bradford's Delph Hill estate, 29-year-old Dynamo first learnt to perform illusions from his grandfather, in order to outsmart childhood bullies.

Magic quickly took over his life, and it was from then on that Dynamo knew what he was destined to do. From the streets of London to the beaches of Miami, Dynamo shocks, thrills and amazes people from all walks of life. "That's the thing I love about magic - it doesn't matter if you're a kid living in Bradford or a big shot celebrity, it puts everyone on the same level" Dynamo says.

Follow the most exicitng magician of a generation as he walks on water, styles out matrix levitations and turns lottery forms into real money. Let you and your family be blown away this Christmas Day with Dynamo: Magician Impossible.