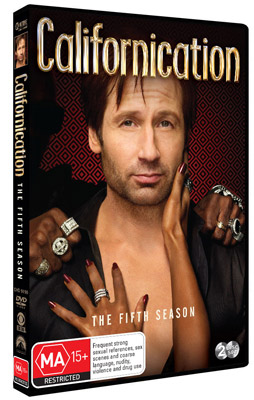 Your favourite womaniser is back as Hank Moody returns in the seductively entertaining Californication Season 5. The talented yet dysfunctional author with the gift of the gab and an effective way with women, continues his extremely libertarian ways in Season 5 of the unique comedy series.

Hank returns to LA from his new home in New York to write the screenplay for a big action movie starring Samurai Apocalupse, a popular rap star, and quickly gets into hot water with Samurai's beautiful but dangerous girlfriend. Hanks ex-wife Karen faces the deterioration of her marriage due to Bates' heavy drinking and Becca. Hank's daughter dates a charming but obnoxious guy who has a little too much in common with Hank.