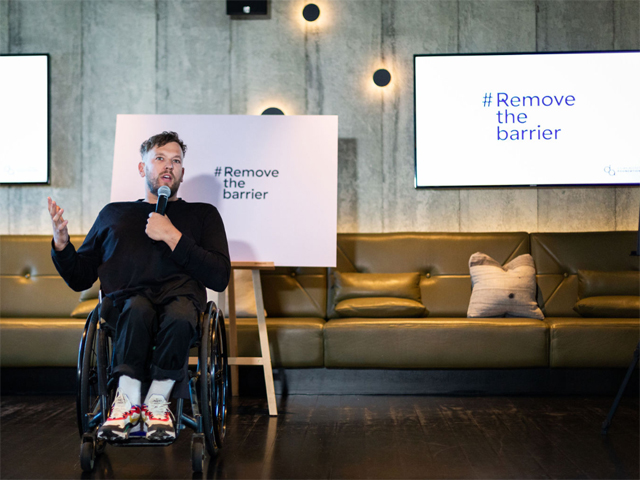 Called Remove the barrier, it addresses a problem facing one in five Australians, 4.3 million people, living with a disability. Only 54 percent of people with disability have employment2, with little to no initiatives in place to change this.

Remove the barrier looks to highlight that people with disabilities spend their whole lives overcoming barriers, but there's one they can't get past, work their way around or find a solution to without everyone's help – getting a job.

As Dylan Alcott explains, despite being willing and able workers, people with disability struggle to find jobs.

"The Dylan Alcott Foundation decided it was time to raise awareness of unemployment among people with disability and change perceptions of what they can achieve in the workplace."

One of the stars of the campaign is 24-year-old, university-educated, Oliver Hunter who uses a wheelchair and has encountered unconscious bias, lack of opportunities and accessibility issues in his hunt for fulfilling work.

"I'd happily go into an interview and get knocked back for my lack of skills, but I've always felt that my disability has been the sole reason for employers turning me down," Oliver said.

Some organisations in Australia are embracing disability, as Shayne Elliot, CEO at ANZ explains: "At ANZ, our purpose is to shape a world where people and communities thrive. Communities thrive when everyone has opportunity."

"Our role is to provide opportunity through employment and ensure our products and services are inclusive and enable every member of our communities to participate and maximise their potential. We know there is still work to be done to fully include people with disability in the workplace, so we're pleased to support The Dylan Alcott Foundation in this important campaign."

For the Dylan Alcott Foundation, the support of ANZ and other companies is just the beginning. "I hope Remove the barrier sparks important conversations about disability inclusion in boardrooms, shop floors and offices around the country," Dylan said.

"Regardless of the fact that people with disability deserve the same rights as able bodied people, disability inclusion is simply good business."

In Australia, 66% of those that do employ people with disability have experienced clear benefits including strengthening workplace morale, improved skill set, greater customer satisfaction and improved productivity.

Evidence has shown people with disability tend to take fewer days off, take less sick leave and stay in jobs for longer than other workers.

The Dylan Alcott Foundation, in collaboration with BWM Dentsu has launched a powerful video that follows three people overcoming physical and mental barriers as they prepare for their working day. It closes on Oliver, unable to get through an invisible barrier at the front door of his office.

The hero film and accompanying imagery will feature in Out of Home, TV, digital and online media across Australia throughout July and August.

Oliver, who stars in the film, said: "People with disability are fully capable of doing an office job, a supermarket or a retail shop. Just give us a go. Let us have a crack and you'll see what we're capable of."

Visit www.removethebarrier.com to find out how you can help. 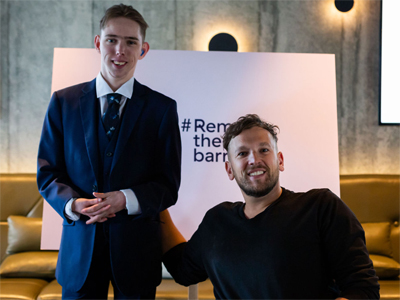 Question: Can you tell us about the Remove the barrier initiative?

Dylan Alcott: 4.3 million Australians live with a disability and for them, the unemployment rate is twice that of the general population. People with disabilities spend their whole lives overcoming barriers, but there's one they can't get past – getting a job.

The campaign aims to raise awareness of the high rates of unemployment among people with disability and to change perceptions of disability in the workplace by removing barriers, including those pertaining to accessibility as well as discrimination, unconscious bias and prejudice.


Question: What are just some of the invisible barriers those with disabilities face especially in relation to employment?

Dylan Alcott: Unfortunately, there are so many barriers that people with a disability face trying to gain employment. For me personally, it can be as simple as being able to access an interview room. I've turned up to an interview before only to be told it's up a set of stairs and because of that, they said they cancelled the interview and I was sent on my way.

The invisible barriers that every single person with a disability face is the unconscious bias that is still so prevalent in Australia. That's the inherent belief that you are broken, less capable and most importantly unemployable, and that you can't do it as well as an able-bodied person.


Question: Can you tell us about the focus group research you conducted for this initiative?

Dylan Alcott: We conducted a focus group with young Australian's who have a disability to find out what they are most worried about. Unanimously it was getting a job.


Question: What have studies shown about employees with disabilities in the workplace (specifically in relation to productivity and sick days)?


Question: What is the main message you hope to spread to Australians with the Remove the Barrier initiative?


Question: How can we Remove the Barrier?

Dylan Alcott: Start spreading the word. This means having a conversation with your boss or if you are the boss, speaking with HR on creating a workplace that is accessible for people with a disability. And then acting on it, removing the barrier is easier than you think. It can be as simple as using inclusive language in your job advertisements to expand your talent pool.

We have created a website on removing the barrier which has tools to upskill and make people disability confident and workplaces disability friendly www.removethebarrier.com