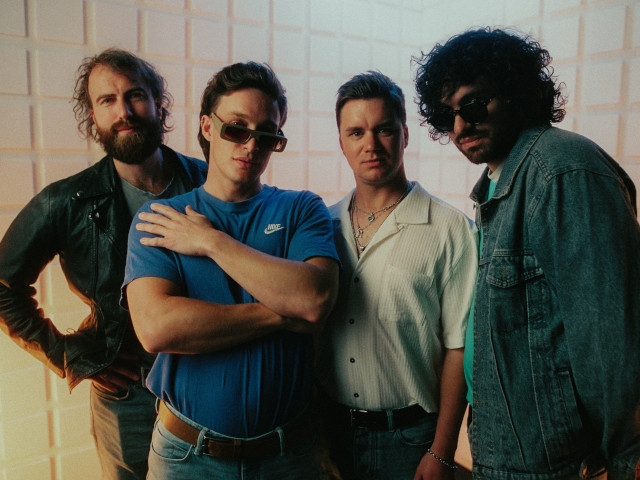 The future is looking bright for Perth indie four-piece Death by Denim as they finally share details of their much-anticipated forthcoming sophomore album, Moonbow out early 2022 and will include hits 'Small World' & 'Cause A Scene'.

To celebrate, they have delivered up another driving single of pure, woozy bliss 'Feels Like Fiction' which premiered on triple j.

Of the song, the band says "This song centres on the feeling that certain events were as destined as they were random, how some moments and relationships seem so inevitable and timeless yet incredibly fleeting. Watching yourself get older and beginning to reminisce as you look at past photographs, realising that life seems as short as it is eternal. Concluding that it must all be fictional, finishing your breakfast and getting on with the day."

Death by Denim have been working hard to release their new album Moonbow & to keep the party going they're hitting the road on a National Tour early March-April 2022. Fans will be able to catch all their favourites plus get to see the brand-new album performed live for the very first time - tickets go on-sale today at 10am AEDT

"Moving into the second album we wanted things to evolve and feel different without trying to redefine our sound completely. Feels Like Fiction was one of the first we recorded that found us moving in a refreshing new direction, stripping things back a touch and adding some acoustic elements to create more space. It set the tone for a new wave of songs to come."

'Feels Like Fiction' follows 'Cause a Scene' and 'Small World', both tracks a taste of what to expect from their sophomore album 'Moonbow' coming early 2022. They follow a string of successful releases last year, with Death by Denim having three songs added to high rotation on triple j from their debut album and seeing fan favourites 'Cigarettes and Honey' and 'Wiggy' combining for 3 million streams on Spotify. 2020 also saw them signing to Paradigm Talent Agency as well as being part of a select few to showcase at BIGSOUND50 and SXSW's first digital festival.