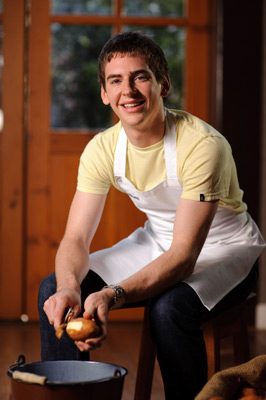 Treat your tastebuds at FlavourFest
Prepare your taste buds, because from Saturday 11 June to Monday 13 June 2011, as part of the Hunter Valley Wine and Food Month, Hunter Valley Gardens will host the 2nd Annual FlavourFest, with more celebrities, more fun activities and even more international delicacies than last year.

Kyle McKendry, General Manager of Hunter Valley Gardens says, "We're really excited about this year's event. We can guarantee that if you enjoyed last year's festivities, you'll love this year's feast for all the senses!"

Alvin Quah: 2010 Masterchef Competitor- Saturday 11th and Sunday 12th 10.30am - 3.30pm
In 2010 Alvin featured on Series 2 of Masterchef and departed after making a more than credible bid for the title, but not before capturing the attention of audiences across Australia. Alvin will inspire all at FlavourFest by demonstrating a variety of unique Malaysian and Western inspired recipes.

Callum Hann: 2010 Masterchef Competitor- Sunday 12th and Monday 13th 10.30am - 3.30pm
Youngest contestant and runner up of Series 2 of Masterchef, Callum Hann, put aside his engineering degree to compete in the show. His ability to learn, flair for sweets and his boyish charm made him a favourite in the 2010 competition. Callum will prepare a range of dishes for guests to sample, sharing some of the culinary tips the Masterchef judges passed on to him.

Another favourite at this year's Flavourfest is Eat Street, an entire street filled with delectable food and drinks to please everyone's tastes. There will also be a marketplace offering delicious goodies to taste, smell and purchase.

The kiddies haven't been forgotten! This year they will be entertained with special guest Miss Fruitcake,who loves to sing and dance as she entertains the young ones. Kids will also have a chance to test out their cooking skills decorating tasty cookies!

Question: What events are you participating in at FlavourFest?


Question: What mouth watering meals will you are creating for those attending FlavourFest?

Callum Hann: I don't want to give everything away but one of the dishes I am doing is a favourite of mine at the moment, it is Chilli Jam Mussels that have been steamed with beer. I think there is something about frying off chilli, shallots and garlic because when you fry them off they're quite subtle and then go quite sweet and then adding something bitter like beer actually works really well to steam the mussels. Most people cook mussels with stock or wine and not with beer and I have found that often wine and food go together well but sometimes beer and food actually go together, better.


Question: Will you be sharing culinary tips with the FlavourFest crowd?

Callum Hann: I certainly will try to. That's the best thing about an event like this because it is an opportunity for people to not only try a little bit of food and see something a bit different but also ask a few questions and perhaps I can give people a few hints and tips from everything I've learnt in the past year.


Question: What have you been doing since you finished on MasterChef?

Callum Hann: I moved to Melbourne for a couple of months and I worked at George Calombaris' restaurant The Press Club. Often people say they can't get a table at The Press Club, but that's because they try for Friday and Saturday nights - it's best to book ahead but on night between Monday and Thursday especially if you're local in Melbourne or even a Sunday lunchtime because they're really good and it's still the weekend but not a lot of people are dinning out and you can often get a booking.

I also had the opportunity with a group of University villages to do cooking lessons with students at six different Universities around Australia. I spent time at each University doing a few cooking lessons for the students which was amazing, it was probably my dream job; I lived the University lifestyle but I got to cook, I didn't have to go to lectures or anything boring.

I really like educating and inspiring people and I find it really rewarding when someone hasn't eaten something before and they eat it and think 'oh wow' or people who are convinced that they hate seafood and you serve them a beautiful fish dish and they love it. I have recently started a cooking school in Adelaide called Spout. I really loved teaching at the Universities but not everyone could be hands on because there was only one stove top and one set of equipment that I was using. My philosophy is that the best way to learn is to get hands on and do it - I wanted to continue that theme and get people making things in the classes. The classes begin with a mini demonstration and then up to 22 people can cook and make the dishes themselves. Then we all sit down together, at the end, and have a glass of wine and try the food they've made. It's a fun, non-intimidating atmosphere. For more information see: www.sproutcooking.com.au


Question: Have you been watching MasterChef Season 3 - do you have an idea which contestants will see in the final?

Callum Hann: I most certainly have been because I am writing a blog for the MasterChef website and I have to be quite savvy with what is going on. From the writing of the blog point of view I can't predict things because I know more or less what is going to happen. I just try and keep 'prediction' out of the blog.


Question: What was your favourite challenge on MasterChef?

Callum Hann: My favourite challenge was that we were lucky enough to travel to London and Paris and it would have to be the Afternoon Tea challenge in London where I got to meet Jamie Oliver who is my food idol or the challenge that was like the Amazing Race style; where we had to race from London to Paris and cook in Paris. I think most people would kill to do those challenges and we got to do it as part of the challenge for MasterChef, which was really, really amazing.


Question: What tips do you have for home chefs wanting to audition for the next series of MasterChef?

Callum Hann: In terms of the auditioning processes, the judges have to see something in you that makes you stand apart from the other people you are auditioning with. I think it is worthwhile cooking the best dish you can and trying to make it something a little bit different. It is important to be different because the judges will be tasting hundreds of risottos a day. For example, I made a Tunnel Boned Quail dish which is when you remove all the bones of the quail without actually cutting it open so then you can stuff it and eat the whole quail, without any bones. I did it in the hour we had prescribed and I did it because I didn't think many people would be cooking quail to start with. I showed technique because that is what they were looking for as well as my personality so the judges can assess whether you will do well, or not. You certainly can't hold back, you have to give it everything because there are so many other people that want the same thing that you do.


Question: When you're at home, what are your favourite dishes to serve?

Callum Hann: Good question. I don't like cooking the same thing too many times because I get bored. In winter I really like eating comfort foods such as braised dishes and meals like Osso Bucco or spicy curries so you can sit down and have a big bowl when it's raining outside - delicious!


Question: What is the best cooking advice you have received?

Callum Hann: It is very difficult to put together everything I have learnt in the last year. If you're not confident or good with something, although it sounds weird, the best thing to do is make it, lots. For example if you're not good at making pastry, you should go and make ten batches of pastry. I remember there was a challenge in the MasterChef competition where I had to smoke yoghurt and I way over smoked it and the judges told me as such and I then didn't want to do that again. I put smoking yoghurt in the back of my mind and the last thing I wanted to do is cook a dish with smoked yoghurt. When I did work experience at another one of George Calombaris' restaurants, literally the first job they made me do when I walked in the door was smoke yoghurt. I was scared of doing it because I had done it once and got it wrong. By doing it 50 times throughout the rest of my time in the restaurant and doing it right you learn to do it and now it doesn't faze me at all.

Jay from MasterChef Series 3 has cooked the cake that eliminated him from the MasterChef kitchen so many times he doesn't need the recipe anymore! I think that is a really good attitude and that's why someone like Jay will go quite far in the industry because instead of thinking 'Oh no! Dessert is not for me, I never want to do that again' he has gone the opposite way and thought 'you've beaten me but I'm going to become good at it'. If he has that attitude with everything in cooking he'll go pretty far, I think.