Mystery Mark, proudly supported by Coca Cola is the brainchild of two of the Australian Music Event Industry's most respected names. Sam Righi, an original founder of Frontier Touring and the Harbour Agency, is well regarded as one of the top tour promoters in the country. His company Big Deal Touring is responsible for touring some of the world's biggest acts. Elliot Kleiner, an original founder of the Blue Light Disco phenomenon and Australia's foremost expert in teen events, brings his company Prom Night Events to the project. The story goes, these two stalwarts were talking over lunch about the rapid decline in the quality and integrity of the festival scene, and rightfully decided to reign in their vast pool of resources to create what many are calling a 're-boot" of the dance party scene, parading in the form of Mystery Mark.

The prodigal son of Melbourne's underground dance music has come to earn widespread praise and an impressive reputation for his work in the music industry as DJ and Producer alike. With recent tours across Europe, Australia, Asia and North America firmly under his belt and two national festival tours for Stereosonic and Goodlife, it is safe to say that Joel Fletcher is undoubtedly one of the most exciting talents in his genre, and the captivating and electrifying sound of Joel Fletcher is showing no signs of slowing down.

ARIA Nominated Multi-Platinum Artists, party-boys and all-round bad-role-models, Bombs Away, are set to hit main stage armed with music that's earned them numerous ARIA #1 singles, Top 10 songs around the world, and a Top 40 spot on the Billboard charts. Voted #1 Artist in Australia, Bombs Away will turn it up and turn Mystery Mark into one of the greatest dance party nights in history!

Bondi boys, Andy and Matt have kept their feet on the ground and let their music do the talking! Yolanda Be Cool's unavoidable worldwide number one breakthrough track, "We No Speak Americano" sold over 5 million copies and amassed over 200 million YouTube views. This November, the boys will be making an appearance at Sydney's inaugural Mystery Mark to sample their pop sensibility heavy party music to surprise the audience with their eclectic, housed up DJ set.

Uberjak'd is at the forefront of the new wave of Australian club producers impacting the global electronic scene, with freshly signed deals across Steve Aoki's Dim Mak, Ministry of Sound Australia and Laidback Luke's Mixmash. In just the past few years Uberjak'd has played some of the most prestigious festivals and venues in the world including WMC, Pacha Ibiza, Pacha Sydney, Webster Hall New York, Stereosonic and is about to add Mystery Mark to an impressive list.

Melbourne duo SCNDL have built a name that has concreted their name as a force to be reckoned with on the global dance music scene. 2015 saw the duo release hugely successful originals, remixes and collabs, including a remix of Will Sparks' hit -Ah Yeah So What', which skyrocketed up the Beatport charts and came in 9th on Beatport's list of top selling Electro House tunes for 2015. Touring throughout the US & Canada, Asia and Australia, and releasing tracks from some of the biggest labels in the world, SCNDL is going to pump it up at Mystery Mark.

Brooke Evers is one of the hottest Australian DJ exports to venture across the shores into Asia, Europe and the Americas. On the decks, Brooke has created a unique mixed-format sound that knows no boundaries within the electronic genres. Simply put, she is the -ultimate party DJ' and Las Vegas agrees. With notable remix productions of original artists such as Savage, Matt Corby, MITS and Marcus Santoro, Brooke Evers, party-ready ravers get ready to hashtag #IPartiedWithBrookeEvers as she gears up to set the Mystery Mark stage on fire!

Mystery Mark festival is a 15+ and licensed 18+ event showcasing the country's top DJ's on main stage, and even more live entertainment around the site on Saturday 19 November 2016 at Sydney Showground. Doors open 3pm AEST. VIP and Early Bird tickets are on sale now at www.mysterymark.com.au.


Interview with Bombs Away

Question: Who are you looking forward to seeing at Mystery Mark?

Bombs Away: We're really lucky to be friends with a heap of the awesome lineup, it's always great to catch up with everyone like SCNDL & Brooke, Tenno is alright too.


Question: What can you tell us about your set at Mystery Mark?

Bombs Away: Without giving too much away, we're super excited to perform our brand new track 100% live! 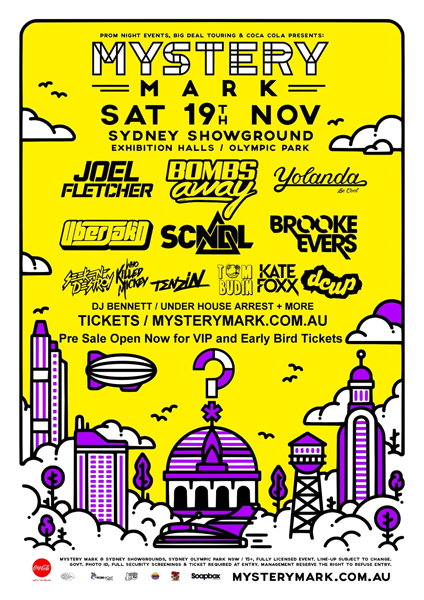 Bombs Away: We like to pull from experiences we've had for songs like Rewind, Better Luck Next time, or channel our inner party for tracks like Party Bass and our new one Sneak Out.

Bombs Away: Lots of the more downtempo stuff during the week or some live band recordings!

Bombs Away: Just before Mystery Mark we're releasing our brand new single on TV and Radio, Sneak Out.

Bombs Away: Sometimes when we're on tour it gets a bit full on with no sleep and nonstop airports, but no matter what, we have the best job in the world.

Bombs Away: Definitely performing live, there's no better feeling than having everyone party along with us!

Bombs Away: Probably bands like Blink and Greenday, Offspring etc!

Bombs Away: Making the jump to a full time touring DJ was a huge leap of faith, to leave behind a secure day job and pin everything on hoping people like you enough to come and see you.

Bombs Away: We both live together so we generally spend a bit of time discussing what's next for us, but a huge part of the job when we're not on tour is actually pretty boring admin and back end stuff, organising releases, paperwork, licensing etc, Tommy is usually locked in the studio and I'll (Sketch) be stuck at a desk or listening to new submissions for the record label.

Bombs Away: Hearing people who have been through hard times and said that our tunes have gotten them through it, or who come to shows and know every word to every song, its humbling knowing that we've touched so many lives.

Bombs Away: There are so many amazing artists around at the moment, SCNDL who happen to be at Mystery Mark as well are great dudes who just remixed our new track so that was awesome, but we'd also love to get in the studio with someone like Santana to record some live elements as well!


Question: Can you tell us 5 things required for a happy and enjoyable life?

Bombs Away: 1. Give yourself something to look forward to, big or small, set an achievable short term goal, and take action.
2. Be able to step back and look from the outside in, and appreciate the small things if you're reading this your day can't be that bad.
3. Always be learning or working on something new, a new hobby, book or goal gives you a fresh focus, its human nature.
4. Fake it till you make it. When you wake up, even if today might throw challenges at you, force yourself to approach whatever they are with a positive attitude even if it feels fake, you'll eventually realise it wasn't fake at all.
5. Try and stay active, even 20 mins a day gets your endorphins going which gives you more balance in your day, and stops you feeling moopy.