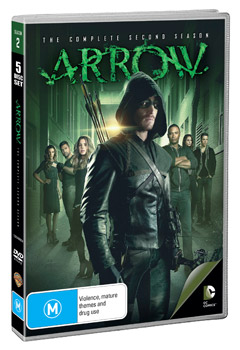 But like all wars, there are casualties. Season One ended with Oliver unable to prevent the destruction of the Glades, the poorest section of Starling City, and the death of his closest friend, Tommy Merlyn. Adding salt to the wound is the fact that his mother aided and abetted this plot, leading to her incarceration in Iron Heights Prison.

Meanwhile, Thea has rebuilt her life with the help of her new boyfriend, Roy Harper (new series star Colton Haynes) and her job running Oliver's nightclub, Verdant. When Thea is abducted by vigilantes inspired by Oliver's crusade, Oliver must rededicate himself to his mission " but he knows that this time he must be more than just another vigilante. To honour his fallen friend and protect the people he loves, he must become a beacon of hope for the city's most vulnerable, and a weapon of justice against those who prey upon them… He must become The Arrow.

In the second season, Oliver must transform from vigilante to hero. Diggle and Felicity travel to the island of Lian Yu in search of Oliver, who left Starling City after the devastation of The Undertaking and his failure to avert it. Convinced to return home, Oliver finds that things are in much worse shape than he imagined " Isabel Rochev (recurring guest star Summer Glau) is preparing a hostile takeover of Queen Consolidated, Thea refuses to visit Moira in jail, Roy is trying to fill the void left by the Arrow's absence, and Laurel is working with the District Attorney's office to take down the vigilante. Meanwhile, flashbacks to the island show Oliver's mentors Slade (new series star Manu Bennett), Shado (recurring guest star Celina Jade) and Oliver in a desperate situation.

Based on DC Comics, Green Arrow superhero comic book series, Arrow has been reinvented for a modern day audience...