Anna Smyrk has come a long way since growing up on a lavender farm in Central Victoria. She has toured widely across Australia over the last few years (including appearances at Port Fairy Folk Festival and the Queenscliff Music Festival), juggling her music with her work in international development. In January she toured the UK for the first time, playing to packed out folk clubs and earning herself invitations to return in 2020 for festival and headline appearances.

Her debut EP, Song of the Silver-tongued Magpie, was described as "exquisite" by ABC Radio National, while Rhythms Magazine called it "a slow-burning gem".

'Home' - the first single from Anna's forthcoming second EP - was released earlier this year and has been getting love on Double J, ABC, BBC and community radio. It was 'Track of the Day' on AU Review with author Jodie Sloan calling it "a glorious piece of musical storytelling". Tiana Speter from the Soundcheck said it "packs a heart-rending and elegant punch."

With the lyrical imagery of Sharon Van Etten, lush vocal harmonies reminiscent of Seeker Lover Keeper, and a rousing arrangement worthy of The Decemberists, Anna's latest single, 'Alight', is an alt-folk anthem for our times. The song came out of a dark place despite being written during the two & half years Anna lived in the Solomon Islands.

"There was so much going on in world politics making me miserable, and in the Solomon Islands I was seeing first-hand what it looks like as the world starts to go underwater" Anna explains.

It was a book that turned Anna's mind around: Hope in the Dark by US activist Rebecca Solnit.

"I wanted to write a song that conveyed the feeling this book gave me" says Anna. "It talks about how hope can be an axe we can use to break down doors. Hopeful actions can seem meaningless against all the darkness and uncertainty, but the book shows how, historically, those small acts have added up to huge changes."

Glowing with rich layers of vocals, 'Alight' was recorded in a Central Victorian farmhouse in the middle of a dry, brown summer when Anna was visiting home for a couple of weeks. It features a band of old friends on violin, banjo, dobro, double bass and drums and Anna's sister on backing vocals.

"It's always super energizing to play this song live, and recording it felt the same" says Anna. "There were quite a few air punches in the studio that day."

The music video for 'Alight' was shot at an abandoned mansion in Tagaytay, Philippines by award-winning Phillipino film-makers Sheron Dayoc (producer) and Sonny Calvento (director). Their latest film won Best Full-Length Feature at Cinemalaya Festival in the Philippines and is currently competing in the Busan International Film Festival in Korea.

'Alight' is the third single to be lifted from Anna Smyrk's sophomore EP, Swim, out on Nov 1st 2019. From the sapphire waters of the Solomon Islands to crumbling Cambodian towns, the EP is a collection of songs about Anna's time spent living in wild places.

The next 12 months will see Anna splitting her time between advocacy work in the Philippines and touring her new EP around Australia and the UK. 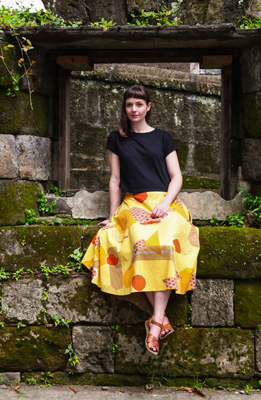 Anna Smyrk: Story-telling songs about wild places that grab you with lush vocal layers and lyrics that keep revealing more on each listen.

Anna Smyrk: I always love playing 'Benjamin'- it's a song I wrote about a tiny island in the Solomon Islands. I had been living in the capital city of the Solomons for a few months before I went to Benjamin's island, it was the first time I'd gotten out to a more remote spot. And it was one of the most beautiful places I've ever seen- still, blue water, amazing coral reefs. Playing that song takes me back.

Anna Smyrk: I'll be touring over summer, playing some festivals and a bunch of dates around the country. I'll be with a trio of killer players, so you'll hear lush vocal harmonies, violin, mandolin, bass and keyboards throughout the set. We'll be playing songs that I've written over the last few years living in Cambodia, the Solomon Islands and the Philippines, so you can expect plenty of stories about those places as well.

Anna Smyrk: That's a tough one... they almost feel like completely different art forms! Recording is great because you get to build a song up layer by layer and try things in different ways until you make the sound you want. But I love performing for the intimacy you can get in a room full of people all hearing and feeling at the same time. If I had to choose I think I'd have to go with performing.

Anna Smyrk: I always seem to write most when I'm out of my comfort zone in some way, especially when I'm in an unknown place. That's been one of the cool things about traveling so much over the last few years; it brings up lots of questions and emotions that inevitably get funneled into songs.

Anna Smyrk: I've been loving the new one from Seeker Lover Keeper. I've also been smashing Sharon Van Etten's back catalogue these last few weeks, there are just so many good songs! Anna Cordell- who'll be opening my launch show in Melbourne- has just put out a gorgeous new single too, that's been on high rotation.

Anna Smyrk: A friend took me to my first music festival as a teenager- it was Queenscliff Music Fest in the early 2000s and I thought it was the best place in the world. I remember the crowd going nuts for the John Butler Trio set and thinking how cool it must be to just hang out at festivals all the time. That was around the time I started to write songs, I'm sure that experience was part of the inspiration.

Anna Smyrk: I would make a music video with Wes Anderson and hopefully he would get Tilda Swinton to act in it! Oh that would be so fun. I'm imagining all the pastel colours.

Anna Smyrk: Time! There is just so much that has to go on behind the scenes for an independent artists and it often feels like there aren't enough hours in the day, especially because I juggle music with other work that I'm equally passionate about. I've had to learn how to take it one step at a time and accept that things will progress at their own pace.

Anna Smyrk: I spend part of the year playing music and touring and part of my time working overseas in international development, so I'm not sure there is ever a typical day! But every day includes a very large cup of tea in the morning, too much emailing, hopefully a bit of bike riding and probably sometime in the kitchen cooking something tasty.