Three iconic frontmen – and great musical friends – have joined forces for an unforgettable tour, heading to Australia for a limited run of shows this November. Featuring Peter Howarth from The Hollies, Mick Wilson from 10cc and Pete Lincoln from The Sweet, Frontm3n is a show jam-packed with classic hits, three formidable frontmen with their guitars and their amazing voices.

The All For One tour is an intimate glimpse into the music – and behind the scenes – of these iconic bands. The acoustic concert features not only the great music from The Hollies, 10cc and The Sweet, but also great stories and humour of the musicians' time on the road and in the studio. They've recently sold-out tours throughout Germany and Scandinavia; and received a huge nod of approval performing a coveted spot to millions from the Brandenburg Gate on German TV to welcome in the New Year in 2018.

Their most recent DVD release – Live In Berlin – hit #2 in Germany, sitting in the Top 30 for eight weeks, and achieved the #1 position in Amazon's Music DVD Chart. At the end of last year, Frontm3n released an impressive double CD of original songs, including the singles All For One and Open Up, which were embraced by fans. The album also features some reworked recordings of familiar hits. The second CD was an insight into the warmth and intimacy of a Frontm3n live show, with fabulous acoustic arrangements of favourite tracks by the three bands.

It was back in the early 90s when Peter, Mick and Pete's friendship first developed. They worked together in Sir Cliff Richard's band and since then they have each shared the stage with many incredible performers, including the likes of Lionel Ritchie, Kylie Minogue, Cher, Tina Turner and Shakin' Stevens to name a few. It is when they are on the stage together that they really shine. The All For One tour features fresh acoustic interpretations of hit songs that have been on radio playlists for generations.

Audiences will be taken through the musical journey of the three musicians, with songs such as The Hollies' The Air That I Breathe and He Ain't Heavy, to The Sweet's Love Is Like Oxygen and Ballroom Blitz and 10cc's I'm Not In Love and Dreadlock Holiday. There is even an unforgettable version of Cliff Richard's classics Carrie and Move It. Other hit songs from artists such as Roy Orbison and Sailor are also part of the repertoire, as are some of Frontm3n's original catalogue.

Tickets to Frontm3n's Australian All For One tour are on sale now. 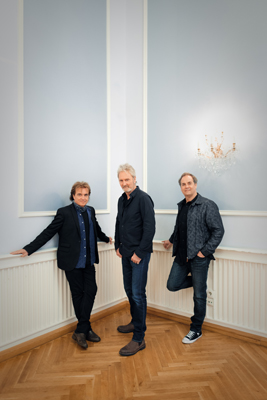 Question: What inspired the latest tour?

Mick Wilson: The FRONTM3N have been enjoying success in Europe for around three years now and we've always wanted to come to Australia. This is kind of full circle for the three of us, as its 25 years since we first worked together, touring Australia with Cliff Richard in 1994.


Question: What should audiences expect from the special run of shows in November?

Mick Wilson: In short, a trip down memory lane and all the big hits from 10cc, The Sweet, The Hollies and Cliff Richard, with a few originals from us - all in an intimate acoustic setting.

Mick Wilson: I can't really pick one favourite as they all have parts and moments that I like, but I guess it's whatever our opening number is - I love to look at the audience when they hear us singing altogether for the first time. I'm not sure that everyone knows what to expect from a FRONTM3N show, but it's that moment when you see the look on people's faces that say's "oh, I get it - we're all going to have a good time tonight!"

Mick Wilson: I guess it would have to be my late parents - they were always so supportive of me and my career choice, so to have them in the audience again one more time would be lovely.

Mick Wilson: I'm going to have to sit on the fence on this one! I love both equally - it's such a blast creating something in the studio that never existed before and then it's just as good, playing the tunes live and seeing people's reaction.

Mick Wilson: I'm a massive fan of Sara Bareilles, as both a singer and a songwriter. I'm also into modern Country music with the likes of Eric Church and Chris Stapleton. There's also some quirky stuff out there from bands like The Lemon Twigs and Five Grand Stereo.

Mick Wilson: It would have to be KD Lang. I love her songwriting and she has such control over her voice and how it's used in her recordings. So, a duet with her and I could die happy!

Mick Wilson: There have been a few low points over the years, both emotionally and financially, but none of them big enough to make me want to do anything different. For me, those moments have a way of making you take stock of where you're headed, who you're putting your trust in and what your end game is.

Mick Wilson: This one is kind of linked to the last question - I think the biggest challenge for me or any artist, is always trying to find the ability to keep the faith, personally, and artistically. The music world is very unpredictable and there's a lot of pressure to achieve whatever someone's individual version of "making it' in the music business is, but I would say, especially in the current economic climate, that being able to write and perform music for a living, is success in itself.

Mick Wilson: That depends on Home or Away! A day at home will start with a dog walk. I've recently moved out of London after 30 years and really enjoying some fresh air and a quieter pace of life. After that, it would be holed up in the studio at my house, either recording or writing (probably something that was inspired by the dog walk!), then a quiet dinner and bed. A day on the road is generally the opposite, but it's quite structured - breakfast, travel to the show, soundcheck, dinner, show, hotel, bed - and then do it all again! Not quite the glamour that people expect. That said, we do get to meet some really great people on the road, which is always nice.

Mick Wilson: For me, the best thing about being a musician is that I'm part of something that has an effect on people and I'm privileged to get to see the end result.