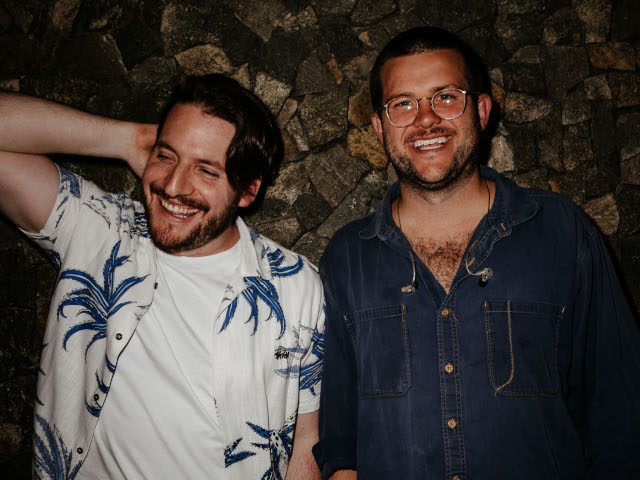 Come breathe in a blast of lush electronic pop on the brand new track Air from Sydney duo Abroad. An upbeat and atmospheric adventure, Air marks another sharp and stunning 2022 release from Abroad, aka Jack Dawson and Will Cruger. And with previous single Coffee, an equally lush affair, already in their wake earlier this year, the release of Air today also accompanies official confirmation of Abroad's debut full length album Departure, due out on Thursday 7 July. The guys will hit the road for a run of east coast shows in July and August, playing Mona Vale, Wollongong, Sydney, Gold Coast, Newcastle and Melbourne.

Air wholeheartedly lives up to its breezy namesake, wafting percolating synths, frothy percussion and driving basslines together in a sea of sumptuous melodics. Equally serene yet dancefloor ready, Air dazzles with its silken simplicity and clever crafsmanship, drawing to mind the effortless likes of Flight Facilities, Disclosure and Hayden James while also flexing Abroad's burgeoning sonic trademark sound as the track builds to its buoyant conclusion. A song created collaboratively and focused on living life in the present, Air marks a proud and positive outing from Abroad HQ, as Jack explains, "Air was a team effort. I came up with the chord progressions on an old piano for the verse and then a few lyrics at the start. Will then took it away and created the ever-so-catchy chorus. It all fell into place quite organically and together they create a song that can play in your mind all day, everyday. Which we hope is a good thing. Air is about a relationship and the early stages of something special, feeling like you need to be around someone like you need oxygen. That feeling is like nothing else in the world."

Air triumphantly continues the ever-evolving Abroad journey, following Jack and Will fortuitously meeting (literally) abroad in London years after they both attended university in Wollongong. And while the pair already have multiple EPs and singles in their wake, alongside over a million streams on Spotify alone, it's in 2022 that the group will finally tick off their debut album release, with their brand new, and aptly-titled, full-length Departure confirmed to release in just over a month on Thursday 7 July. While Departure is packed full of moments to savour and simmer in, amongst some delicious electronic stylings and pop hues, the duo's latest release actually appeared late in the game during the album's creation, as Will elaborates, "We wrote Air towards the end of this album. It fell into place quite organically and became a song that we're both really proud of."

Writing the entire impending album together, with Will on production and mixing, and Dale Becker (Becker Mastering) on mastering duties, Abroad are primed to showcase their passion and aural diversity imminently while also weaving personal experiences and more universal thematics through their energetic and opulent soundscapes. From upbeat dance-ready anthems to more ambient fare, Departure will undoubtedly blast off an incredible new chapter for Abroad, while also allowing an intimate and universal connection between the band and fans alike, with the pair sharing, "The album is really centred around discovering the person in your life that changes everything. We've always been motivated by our lives and the relationships in them, but this album really hones in on the way your world changes when you find the person that you're meant to be with."

Fresh from some recent live shows earlier this year in New South Wales, the sky is the limit for Abroad as they venture closer to their long-awaited debut full-length album, and the pair couldn't be happier to not only share their new material with the world, but also to continue connecting their art with self-expression and their fans, summed up best by Abroad themselves, "Releasing music always feels amazing! We spent so much time crafting Air, so sharing the final product is a proud moment. We're deep down music nerds and love that we can express ourselves through this outlet and people appreciate that."