A Great Big World When The Morning Comes 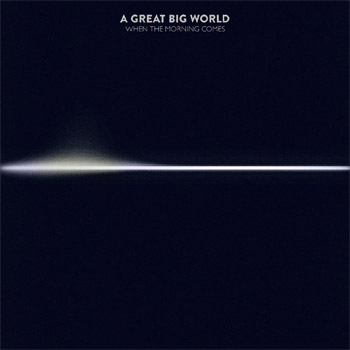 A Great Big World When The Morning Comes

Grammy Award®-winning New York-based twosome A Great Big World has launched the pre-order for their eagerly anticipated new album When The Morning Comes, ahead of its release on November 13th through Black Magnetic/Epic Records and Sony Music Entertainment Australia.

When The Morning Comes features the first single -Hold Each Other' featuring Futuristic, with the music video directed by Marc Klasfeld (Red Hot Chili Peppers, Jay-Z, Katy Perry) out now on VEVO – watch it here.  The duo will perform -Hold Each Other' along with Futuristic and a four piece string section on November 13th to commemorate album release, on NBC's The Today Show and ABC's Live with Kelly & Michael. They recently performed the track for its network TV premiere on NBC's The Tonight Show Starring Jimmy Fallon.

-Hold Each Other' continues a tradition of thoughtful and unshakable anthems from A Great Big World that began with 2013's -Say Something' (with Christina Aguilera).  The #1 ARIA single went on to achieve 4 x Platinum accreditation, and won Best Pop Duo/Group Performance honors at this year's 57th annual Grammy Awards®.  The video for the worldwide hit boasts more than 237 million YouTube views to date. -Say Something' propelled AGBW's debut album, Is There Anybody Out There?, to a #3 debut on the Billboard 200 albums chart and Top 3 on the Australian iTunes Charts.

About A Great Big World:

The magical journey of A Great Big World –  Ian Axel and Chad King – began in the music practice rooms of NYU (New York University) where the two were attending college.  In 2012, after a few twists and turns of fate, the friends formed A Great Big World and released a six-song EP funded by Kickstarter.  It spawned the viral sensation -Everyone Is Gay' and -This Is the New Year,' which was performed by the cast on Fox's Glee.

Soon after, Black Magnetic/Epic Records offered the duo a deal, and issued -Say Something' as their first official single in 2013.  Its terse, tearful piano and Axel's heavenly hypnotic vocals tugged on heartstrings, and struck a chord.  After hearing it during a pivotal segment of Fox's So You Think You Can Dance, Christina Aguilera fell in love with the song.  She collaborated with AGBW on a new recording of the track that they subsequently performed together on NBC's The Voice, which launched it to #1 on iTunes.  More TV performances followed (The American Music Awards, The Victoria's Secret Fashion Show), culminating with the song's release on AGBW's debut album, Is There Anybody Out There? (January 2014).

-Say Something' ultimately occupied the #1 spot on iTunes, ARIA Singles Chart, Billboard's Digital Songs, as well as Spotify and Shazam, in addition to going Top 10 on sales charts in 19 countries.  After turning in a riveting performance at Clive Davis' prestigious annual pre-Grammy® party in January 2014, A Great Big World toured from May through August across the U.S. and Canada, the UK, Europe, Australia, New Zealand, and Asia.

For the remainder of 2014 into 2015, A Great Big World was hard at work on new music that they were eager to present to their legions of fans across the globe.  The release of -Hold Each Other' in July 2015 set the stage for the arrival of their second album When The Morning Comes in November.

4. Hold Each Other (featuring Futuristic)

9. The Future's Right In Front of Me

10. When the Morning Comes