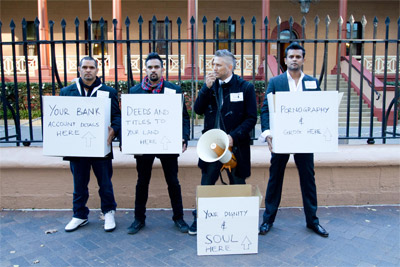 While the Federal Government urges Australians to get behind what is essentially an extension of the Intervention into the Northern Territory for the next ten years under a new title 'Stronger Futures', a Funk Hiphop crew ironically called Whitehouse are urging their listeners to oppose what they view as more of the same government oppression on Australia's first peoples.

Whitehouse have been agitating for social change from the stage and from the studio since they originally crewed up in 2006 and in July 2012 they are taking their messages backed with funky bass lines and solid drum and guitar grooves to the wider community on their first East Coast Tour, promoting their debut album, aptly titled, 'A Funky Intervention'. Joining the ride is conscious Hip-hop crew Impossible Odds from Brisbane and hotly rotated Yung Warriors from Melbourne.

"I love this music we create, especially when we get together to perform it live. I am inspired by the positive reaction we have so far to our album and encouraged that people are digging our message funk vibe. I realise a lot of people don't pay attention to lyrics but as the lyricist in this band I hope that when people come to our show and enjoy an awesome night of infectious grooves that they take a CD home and get to understand what we stand for and that is we want every Australian, black and white and every colour in between to enjoy the same basic human rights. I also cannot wait to share the stage with Impossible Odds and Yung Warriors- these guys are the future of conscious Ozzie Hip-hop and I feel honoured that they wanna support this funky fresh tour." Sonic Nomad

For music lovers sick of sugar coated lyrics over ripped off nursery rhyme tunes and who want some home grown music with a bit of substance then look out because the Whitehouse just got a new administration enacting their new bill called "A Funky Intervention" available now in leading record stores and iTunes.

Question: What was the inspiration behind A Funky Intervention?

Grant Saunders: A Funky Intervention is a parody on the actual NT Intervention and the cover of the CD is a political satire. The music references the NT Intervention especially in the track PM Gonna Safe Us which is a protest against the intervention. The other tracks on the album have political as well as personal messages which have many inspirations.

Grant Saunders: Rocking crowds because that's what we do best! We want to play at new venues to new people and get on the road with the crew and hopefully write new material.


Question: How do you go about writing your music?

Grant Saunders: We use a new wave of song-writing because our guitarist lives in Port Macquarie, I live in Newcastle and our drummer and bass guitarist live in Sydney; we exchange material using a dropbox file sharing program. Usually our guitarist comes up with the base as he has a sound studio at home and he can also play the drums and keys (his a freak) and then he'll send us a file and I'll dig up old lyrics or be inspired to write something new and fresh.

Grant Saunders: We got together in 2006 and the first song we put together was Wake Up which is on the album (it's a bit old but it's made its way onto the album because it's been with us, that long) and it was a Rage Against the Machine theme as we were into different genres of music but what resonated with us all were 90's activist bands such as Rage Against the Machine and Public Enemy. What originally inspired me into political writing was the message from Green Master Flash.

There is another group titled Parliament and we liked the irony in that name and that's why we went with Whitehouse and it has stuck with us.


Question: What message do you hope your music gives to your fans and audiences?

Grant Saunders: Mostly to think about the future, I'm a parent and our lead guitarist is also a family man and once you become a parent you start to think about other things, other than yourself and you want to leave a legacy whilst doing something positive with your life. Previously I was about living life to the max and now it's about doing something in order to conserve a future for our kids and their kids.

Grant Saunders: I like them equally; I do really feel alive and natural when I'm on stage and I think I'll be performing forever, regardless of age, I love it so much. When you're in the studio you have the time to perfect your craft because you can do numerous takes until you have it down pat, exactly how you want it. There is something mysterious about live because you don't know what to expect as it is different every time even though you are playing the same music although we try and mix it up, to keep it interesting.

Grant Saunders: The biggest challenge is making a living out of the musical industry - it is so hard because there is such a disparity between the artists who are getting radio play on the major stations to the people at our level to the up-and-coming emerging artists. I feel like we're still emerging but we've been at it for a long time now. I know of artists who get $50,000 a show to those who are getting $200 at a venue… There is a big disparity and I feel there should be a regularity body here and overseas to make it fair and then more people could make a career out of the love of their art form. Ultimately the music will keep us going.

Grant Saunders: My favourite part is coming up with new material and the feeling you have when everyone is in sync and the music feeds your creatively and your inspiration to write. I also love when we get a crowd to dance, doesn't matter if it's at a festival or a small venue, even getting a handful of people on the dance floor is great!

Grant Saunders: I approached KRS-One who I am a fan of and I hope one day I can work with him. I'd love to find out where Zack de la Rocha is and get him rocking again! There are so many people I'd love to work with… imagine Stevie Wonder!