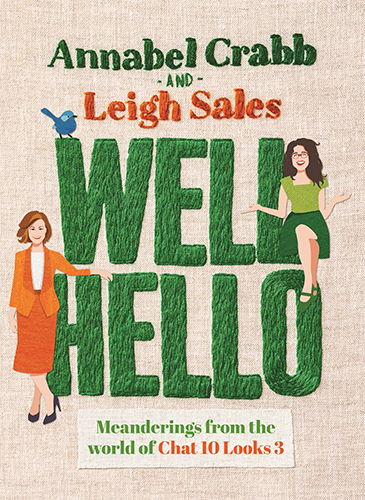 Annabel Crabb and Leigh Sales are two of Australia's most highly regarded journalists and for almost seven years they've been sharing their thoughts on culture, cooking and occasionally sport in their phenomenally successful podcast Chat 10 Looks 3. The podcast is a conversation on between friends who admire and respect each other, but shell like to point out each other's shortcomings and foibles, lending a richness and familiarity to it.

Now they've found time to write Well Hello, a book based loosely on the podcast. It contains everything you'd expect: their top ten books, cooking 'adjustments' for Annabel from Leigh, postulations about music, great television and much more.

• How to juggle your time and the art of saying no

• How to conduct a conversation and the power of silence

• Advice on how to deal with social media abuse

Written with candour and wry wisdom, it's a book that will entertain, delight and inform.

Annabel Crabb is one of Australia's most popular political commentators, a Walkleyaward-winning writer, and the host and creator of ABC shows including Kitchen Cabinet, The House With Annabel Crabb, and Ms Represented, a documentary series on women in parliament. She's been a member of the parliamentary press gallery since 1999, working for various print titles as a political correspondent and sketchwriter. Annabel is the author of the bestselling nonfi ction work The Wife Drought, and two cookbooks written with friend Wendy Sharpe. She won a Walkley Award for her 2009 essay on Malcolm Turnbull, and was Australia's 2011 Eisenhower Fellow

Leigh Sales AM is one of Australia's best known and most respected journalists, as the anchor of the ABC's fl agship nightly current aff airs program 7.30. She has interviewed countless world leaders and celebrities, including Boris Johnson, Hillary Clinton, the Dalai Lama, Bill Gates, Paul McCartney and Elton John, along with every Australian Prime Minister from Bob Hawke onwards. She also hosts the ABC's federal election and budget night broadcasts. She has three Walkley awards for journalism and is the author of three books, Detainee 002, On Doubt and the bestselling Any Ordinary Day.

Meanderings from the world of Chat 10 Looks 3