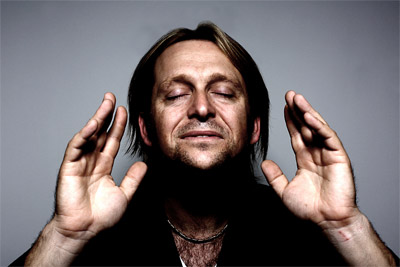 Character comic Tom Binns, the man behind everyone's favourite hospital radio DJ Ivan Brackenbury, makes a triumphant return to the Melbourne International Comedy Festival with his spirit medium, Ian D Montford - a total sell-out in Edinburgh, with critical success and one of the most talked-about cult hits of the festival.

Tom showcased Ian at last year's festivals in Melbourne and Adelaide, where he was twice nominated for the Best Established Comedian Award. Having got the hand of contacting the dead, Tom is back, doing what he does best - creating masterful character comedy as a complement to his new-found gift as a medium.

Says Tom, "The ability to contact the dead has now become second nature to me. "Now I can focus on using the dead in my comedy show. Last year was about learning how to drive my new comedy vehicle; this year is about finding places to go in it."

Question: What should Australian audiences expect from your up-coming shows with Tom Binns?

Ian D Montford: Spirit Comedium: They should expect to laugh and be baffled and astounded…but mainly laugh.


Question: What are your predictions for your shows, this year?

Ian D Montford: Spirit Comedium: I predict that it will definitely rain in Melbourne during my run at the Comedy Festival and that on at least one night I will over do it in the artist bar and regret it during the following day's show.


Question: You use your clairvoyant skills to contact the dead, who are your favourite people to communicate with?

Ian D Montford: Spirit Comedium: I only talk to those celebrities the audience want to communicate with ... Michael Jackson is still very popular, Elvis gets requested a lot and Kerry Packer comes through every night. No one has ever requested him so far but he keeps turning up on the off chance.


Question: When did you first realise you were able to contact the dead?

Ian D Montford: Spirit Comedium: I first realised I had a gift when I was writing a brand new show for the Melbourne International Comedy Festival and it needed a twist. I thought, what if I played a spoof psychic medium and the twist was I could really do it.


Question: What are the most common things, dead people tell you?

Ian D Montford: Spirit Comedium: They tell me about the lives of the people in the audience ... that's what makes the show so mind freaky. I have a spirit guide that makes a very good prompt for when I forget my lines.


Question: How do audience members respond to what you're telling them?

Ian D Montford: Spirit Comedium: They normally flip. Most people coming expect the show just to be a comedy spoofing spirit mediums but when I start to get things eerily accurate the look on people faces is a picture. It makes for a great atmosphere and I think the most bizarre thing about the show is that it can be enjoyed by believers and skeptics at the same time.


Question: What are you looking forward to most about performing in Australia?

Ian D Montford: Spirit Comedium: I love the audiences the most and I quite like the weather.