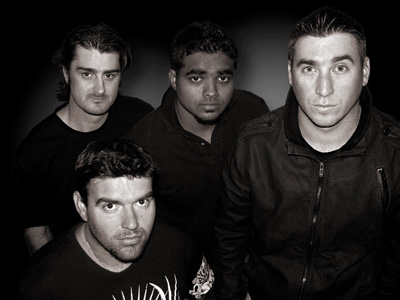 In definition, the Sacred Truth is the ultimate truth. It's the truth that you get when you stop playing with the definition of "truth" and accept that Truth means that which is actually true in reality.

Forming in 2008, Wollongong four-piece and 2010 MusicOz Finalists The Sacred Truth - Nirmal Peter (Vocals), Daniel Hutt (Drums), Peter Grujevski (Guitar) and Wayne Phillis (Bass) - musically embrace the idea that not all is what it seems and in time "the truth will set you free".

After their 2009 debut EP 'Reflections Of Tragedy', The Sacred Truth now return with their debut album 'The Final Confession' to finish the concept story they began. The album was produced by Daniel Hutt, Peter Grujevski and Nirmal Peter along with Adam Jordan from Main Street Studios (Tumbleweed, Porcelain, Mammal) and mastered by Ue Nastasi from Sterling Sound (Fear Factory, Still Remains, Killswitch Engage).

"Think of 'Reflections of Tragedy' [the band's 2009 EP] as the teaser preview of a big budget movie," says drummer Daniel Hutt. Now for the worldwide premiere of 'The Final Confession'. Featuring ten tracks, the LP is packaged with a 16-page booklet that includes an epilogue to the story, diary entries for each song and lyrics.

"It is the first episode of a six story arc that is based on the Six Degrees of Separation principles. In our story it deals with how unrelated events are all linked".
"It tells the story of the unnamed character that is beset by tragic events," describes Hutt. "Each event conspires to push him further into depression and insanity, until he has become someone that he never believed he was. It also deals with themes such as religion, terrorism, grief, broken relationships, alcohol, drugs and isolation".
"The main character is brought up in a very religious household. But his belief in God starts to become twisted and complex and certain issues start to arise".

Having shared the stage with the likes of Cog, Lord, A Thousand Needles in Red, MM9 and Sleep Parade, The Sacred Truth's repertoire of songs feature powerful choruses, crunching riffs, clean echo laded serene passages with hard rock/heavy metal 80's era vocal lines with a stir of R&B/Pop - think Craig David - and the screamo lines reminiscent to those found on a Killswitch Engage track.
"Our live show follows the concept story of the album," says Hutt. "Short pre-recorded pieces before and after songs help the fans to follow along with the storyline. By the end of the live performance fans have not only seen a live show or performance, they've seen a musical EVENT".
www.myspace.com/thesacredtruthmusic