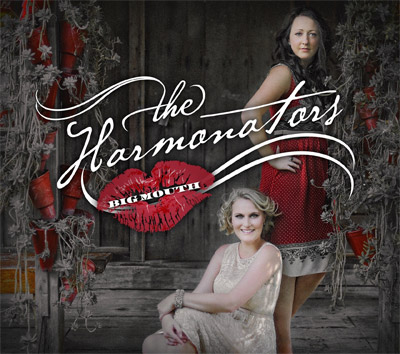 "Big Mouth", brand new album from The Harmonators is out now. It was officially launched at Sydney's Royal Cricketers Arms Hotel on Sunday May 6th and The Pub in Tamworth on Friday May 11th.

Recorded at Nashville's Fool On The Hill studios in August 2011, "Big Mouth" is the second album from the 2009 TIARA Awards Best Duo. Sharing creator credits are long-time producer Matt Fell along with previous song-writing collaborator Sam Hawksley. The latest CD features 10 tracks - six written or co-written by the duo along with Australian and Nashville co-writers.

The lead single, 'Perfect Storm' is currently #18 on the Country Tracks Top 30 & #16 on the Top 100 Country Hits. The related video clip, directed by the award-winning Duncan Toombs is sitting at #33 on the Country Music Channel's Top 50 Countdown.

After deciding on new album title "Big Mouth", Liz and Rae aka The Harmonators knew there would be questions! The girls insist it wasn't a difficult decision and in fact it's quite apt. Not only is it the album's opener and a definite contender for a radio single, Rae explains, "It also describes a little bit of whom we both are and what we're like. If people have been to our shows they would know we like to have a chat and quite often divulge information about ourselves and each other".

Recorded at Nashville's Fool On The Hill studios in August 2011, "Big Mouth" is the second album from the 2009 TIARA Awards Best Duo. Sharing producer credits are long-time producer Matt Fell along with previous song-writing collaborator Sam Hawksley. Assembling some of country music's finest including Dan Dugmore on pedal & lap steel (Kenny Rogers, Hank Williams Jnr, Joe Nichols, Dierks Bentley), Rob McNelley on guitars (Wynonna Judd, Dolly Parton, Lady Antebellum), Eamon McLoughlin on fiddle (founding member of The Greencards) the album was recorded over two weeks. Along with four - five months of writing and sourcing tracks prior to leaving for Music City USA, followed with another nine months of mixing, mastering and finalising artwork, the album will be released on May 4th.

The 10-track release features six songs written or co-written by the duo along with Nashville and Australian co-writers. The title track was written by Jay O'Shea (female half of husband and wife team O'Shea) and Troy Johnson (Sara Evans, Keith Urban) and is about those times when we confess our feelings too early and too easily. Rae's favourite tracks include 'Steal You Away' written by Alyssa Bonagura (daughter of Michael Bonagura and Kathie Baillie of country group Baillie & The Boys) a gorgeous ballad about trying to get the person you have feelings for to open up to you and 'Wherever I Go' written by Rae, Aussie Phil Barton (Lee Brice) and Kris Bergsnes (Chris LeDoux, Randy Travis) a song about leaving/ being away from home but never to far from the people you love...

Liz agrees that 'Wherever I Go' is a standout track as she believes Rae and co have perfectly captured their feelings towards their loved ones. With extensive travel and time away from home, the sacrifice is large but it's made easier when you can carry their love and support with you. 'Save Her Soul' - was new territory for the girls in more ways than one. Unlike anything they've recorded before, it's a tale of a good girl gone bad. "There was a great vibe in the studio; for once Rae and I actually got to record the vocals together. Not surprisingly we got the giggles and Sam (Hawksley) needed to switch our focus more than once", Liz recalls. Another treasured memory for Liz was the recording of 'Steal You Away'. "Sitting in the booth while Chris Tuttle (Jewel) played the piano parts, I was just mesmerised. The solo in this song gave us all tingles," Liz adds.

"Such phenomenal talent played on this record with all the musicians and songwriters we assembled, it's a who's who of country music. Not too shabby hey? Speaking of not too shabby, Rae really had her song-writing mojo going and wrote or co-wrote more than half the album. I'm very proud of her and the amazing songs she created," Liz shares about her good friend she first met in 2001 and they later formed The Harmonators in 2003.

The Harmonators - Rae a 2007 CMAA Country Music College Graduate and Liz a vocal and drama coach for the past 12 years - met while pursuing studies as lead vocalists at the Australian Institute Of Music. Both were born and raised in Sydney and would sing each others' backing vocals while at the institute. Rae is responsible for the duo's musical moniker and after a lecturer pointed out they had something special, they decided to give it a go. The girls have producer Matt Fell to thank, for in essence, bullying them into keeping the name after threatening to buy it... if they didn't keep it!

Review: Rae Moody and Liz Kinninmont are an Australian Country music duo from New South Wales. The duo has been together since 2004 and has recently released their new album Big Mouth, this is the fourth release from the duo since their debut success and Tamworth Music Festival in 2004 and their second full length album.

The duo, who met while pursuing their vocal careers at the Australian Institute of Music are a strong match as their vocals fit together smoothly to produce perfect harmonies.

The album Big Mouth is a perfect example of Australia's talent to produce magnificent musicians, it boast a very contemporary country sound that almost borders on pop. Big Mouth, like most Australian country albums, creates an illusion, within your mind, of sitting on the back porch of a house in the middle of the Australian countryside, with your family, but also has the ability to transport you to a sleepy seaside town sipping coffee while listening to the album play out at the local cafĂ©.

The first single from the album, Perfect Storm is a great choice for a first single with the duo's token harmonic melodies and catchy tunes, this album is a must for all country music fans.
-Fiona Tew

Question: How would you describe Big Mouth?

Liz Kinninmont: Big Mouth is the album that was a long time coming. We had a 4 year gap between this album and out last full length album so we had lots of time to really mould our sound and choose the perfect songs. It's an album about the rise and fall of relationships and how important they are in shaping our lives. What I love most though is how even though the songs collectively tell a story, each song on Big Mouth stands on its own and has its own unique vibe.


Question: Why did you title the album Big Mouth?

Liz Kinninmont: Well, we have a fantastic track that opens the album called Big Mouth written by Jay O'Shea and Troy Johnson which is so much fun and a real kicker. However there is a double meaning… Rae and I... ok maybe mostly me; we really know how to talk. The phrase "can talk underwater with a mouthful of marbles" has been mentioned LOL!

Rae Moody: It's the name of one of the tracks on the album, and we thought it was really catchy, as well as partly describing Liz and I as we do enjoy a chat!


Question: What was your inspiration when working on Big Mouth?

Liz Kinninmont: I think just the lifelong dream of recording an album in Nashville being realised was what inspired me. I remember thinking, we're actually here and we may never have this opportunity again so just take it all in, put your heart and soul into it and make a record you and Rae will always be proud of.

Rae Moody: I think like most artists we are inspired by what is going on in our lives at the time and how we are/were feeling. We were also constantly inspired to make the best possible music we can by other artists and songwriters we know and listen to.


Question: Can you talk about the experience of recording Big Mouth at Fool On The Hill studios?

Liz Kinninmont: We had so much fun at Fool on the Hill. It was a brand new experience for us to have the main band all in the studio together to record each track. These 2 dimensional demos were instantly transformed into these living, breathing songs. And wow what a band we had! The coolest and most talented musos worked on Big Mouth and what was great was; we got to hang out with them and have loads of laughs. Another new and great experience was having not just one but two awesome producers to work with - our long-time friends, producer Matt Fell and Aussie now Nashville based singer/songwriter, Sam Hawksley.

Rae Moody: It was an amazing time, a very different recording process for us as it was much quicker and we were working with phenomenal musicians. I look back now and don't feel like it was actually real; it feels like a world away (although it actually is!).


Question: What music are you currently listening too?

Liz Kinninmont: I know it sounds odd but I'm massively into rock music at the moment - Foo Fighters, Linkin Park and even some classic Def Leppard and of course AC/DC.

Rae Moody: I have just purchased the new Carrie Underwood and McClymonts albums, but it's always a little bit of everything, although Keith Urban and Dixie Chicks are always on high rotation!


Question: Is there a song on the album that you like slightly more than the others?

Liz Kinninmont: I can honestly say that I love, love, love every track on this album but a sentimental favourite of mine is 'Wherever I Go' which Rae wrote while in Nashville. For me it's a song for our friends and family who have stood by us and supported us and we kind of take them with us wherever we go. But what's great is; it's a song everyone can relate to in some way, shape or form.

Rae Moody: It tends to change day by day, but I guess if I had to pick, Perfect Storm. It's the song I am most proud of; particularly since I co-wrote it.


Question: What can you see in your music future?

Liz Kinninmont: Hopefully a lot of travelling around Australia, meeting lots of new music fans and seeing some new places. Performing is my favourite thing to do and I'm so excited to sing this album that I love LIVE! And keep your fingers and toes crossed but hopefully a trip next year back to Nashville to play some shows and start working on a third album.

Rae Moody: A lot more gigs and travelling, getting out and about to new places. Plus more single and video releases to come and just enjoying the journey.