He stole her locket ... she stole his heart.

Jack the Devil's reputation precedes him. The most notorious bushranger on the Central Highlands, nothing throws him off his game ... until he holds up Prudence Stanforth and her grandmother. Jack can't help but be captivated by the feisty Pru, with her sweeping red hair and complete lack of fear.

Weeks later, Pru crosses paths with the respectable businessman Jack Fairweather, and it's not long before she recognises him as the bushranger who stole her beloved necklace. His price for the locket's return is her silence ... and a kiss. A kiss that sparks something inside them both.

When Pru discovers her grandmother has been keeping a devastating secret, running away with Jack the Devil is the perfect escape for her broken heart. The dangerous nature of his less-than-salubrious occupation is a poetic contradiction to her sheltered upbringing and only fuels their passion. Until that danger becomes a reality. Between the return of dark elements from Jack's past and authorities intent on his capture, Jack and Pru must fight for their future together ... or risk losing everything.

A rollicking historical tale about following your heart, finding home in unexpected places - and bushrangers - for readers of Darry Fraser and Alison Stuart.

About the author:
Cheryl Adnams lives in Adelaide, South Australia. She has published four Australian rural romance novels and two Australian historical novels. Cheryl has a Diploma in Freelance Travel Writing and Photography and has lived and worked in the United States, Canada and spent two years with a tour company in Switzerland and Austria. Her passion for Italy, volcanology and cycling have made their way into her stories and her favourite writing retreats include Positano on the Amalfi Coast and Port Willunga Beach just south of Adelaide. When she's not writing, Cheryl is still creating in her busy full time job as a trainer and learning designer.

Question: What originally inspired the idea of The Bushranger's Wife?

Cheryl Adnams: Jack, the hero in The Bushranger's Wife, first appears in my first Australian Historical "The Girl from Eureka". He is a side character with sense of mischief and is just starting out as a bushranger when we meet him in that book. It didn't take long to realise he needed his own story, but I wanted to depict him years later as an older more established bushranger who was perhaps starting to question his galivanting ways.


Question: Who do you hope reads The Bushranger's Wife?

Cheryl Adnams: Everyone of course! But anyone who likes a good historical and enjoys good banter between characters. Readers who want to know what happens after the wedding, after the HEA, and the struggles of a married couple - especially where one of them leads a second, less than upstanding, life. 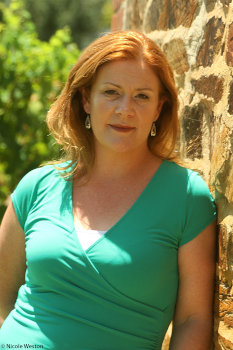 Question: How did you develop your approach to the 1860's?

Cheryl Adnams: Luckily, my research for "The Girl from Eureka" meant that I already had a lot of information about the area I based the story in around Ballarat. But as I discuss in the book through Jack's eyes, Ballarat changed considerably and very quickly over the 1850s and into the 1860s due to the wealth that was being amassed. A ramshackle town of tents and wooden structures from the early days on the goldfields was beginning to be replaced by stone buildings.

Cheryl Adnams: I sometimes use the names of people I know as a bit of a laugh, and also to test if they are reading my books. Haha. In "The Girl from Eureka" I did write in some real people who were there at the Eureka Stockade. I think it helped lend an authenticity when writing about a specific event in history.


Question: What's the main message you hope readers take from The Bushranger's Wife?

Cheryl Adnams: I'm not sure there is a message. It's just a good fun romp. Jack and Pru seem to struggle with honesty in their marriage so maybe that's the message. Honesty between couples is always best.


Question: What research did you do, prior to writing The Bushranger's Wife?

Cheryl Adnams: I read up a lot on Australian bushrangers. Who was roaming the Victorian highways in the 1860s, how did they bail up carriages, were they dangerous or just threatening? I watched a lot of bushranger films but found that most of them were very dark and violent. My favourite bushranger film, or mini-series, is Robbery Under Arms with Sam Neill as Captain Starlight. I love his suave character and larrikin attitude. He's sophisticated and I wanted Jack to have a touch of that and have pride that while he robbed, he never physically harmed anyone. I don't think Pru could have loved him if he was a violent soul.

Cheryl Adnams: The harsh reality is that if you're in it for the money, you're probably in the wrong job. It's hard work and persistence and writing when you are tired and losing faith in your abilities. The key is to remember why you began writing in the first place, why you love it. If you can remember that you will keep going through the hard times. Write what you want to write, because if you write what you think others want, you won't be happy and it won't be your authentic voice either.

Cheryl Adnams: SE Hinton's "The Outsiders" was my favourite book growing up so that is probably where it began. I just started writing one day. Silly teenage romantic dreams often featuring Ponyboy or Sodapop (or more likely Tom Howell and Rob Lowe). The writing came and went over the years and it took until I was in my forties before I even submitted anything to a publisher.

Cheryl Adnams: I am currently waiting to hear if my next book will be published. It's a world war two story, so a step away from the 1800s. After that? I am playing with a few ideas both historical and contemporary. I like to write in multiple genres as it keeps it interesting for me and I think my readers also enjoy the diversity. I guess we will see what 2021 has in store.