The Best Costumes That Hollywood Gave Us in 2018 Dressing up for a costume party gives you a rare chance to be someone else for an evening. You can be a famous rock star, singer, TV personality, writer, video game character, or anyone else you desire.

However, there is one source of entertainment that inspires us year after year to bust out into costume. And that of course is the big screen! Hollywood is well-known for bringing to life great characters who have memorable personalities and costumes. Fortunately, this year was no exception to this rule.

Let's take a look back at some of the most memorable costumes that Hollywood have us in 2018.

Kicking off from where the first film left off, the Parr family is left to try restore their public image as superheroes, navigate through the problems of daily life, and try to thwart a new villain in the process.

The great thing about The Incredibles is that they make for an awesome group costume. Whether you want to harness the super strength of Mr. Incredible, stretch and twist your arms like Elastigirl, or ride a wave of ice just like Frozone, there's something for everyone.

Thanks to the release of the sequel, you should have no problem finding a quality outfit at your local costume shop or online store. If you have the necessary skills and materials, you can create your own Incredible costume too. 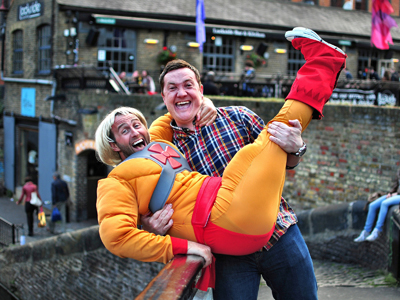 Venom
Being consumed by an alien symbiotic lifeform has its upsides.

For starters, you can shapeshift into a myriad of different forms and figures. Want to morph your arm into a gigantic blunt weapon? Go ahead. Transform into a humanoid form to blend in with the very people trying to hunt you down? They'll never suspect a thing.

Truth be told, you won't be able to pull off these cool moves in a costume. But you will stand out from the crowd – especially if you pair up with a buddy dressed as Spider-Man – and scare the living daylights out of anyone who gets in your way.

There are plenty of costume variations you can purchase online or in-stores. Most stores sell the complete morph suit with a detailed mask, muscular body frame and leggings. Other places sell the accessories as separate depending on your budget.

Tonya Harding
Few incidents have shaken up the sporting world – and drummed up such a worldwide media frenzy – than the case of Tonya Harding and Nancy Kerrigan.

On 6 January 1994, figure skater Nancy Kerrigan was attacked by an assailant who was hired by the ex-husband of her rival, Tonya Harding, in an attempt to stop her from competing in the Winter Olympics.

With the release of the biographical film I, Tonya last year, not only has there been renewed interest in the case, but also Tonya's ice skating costumes (many of which were handmade with help from Tonya's mother). From the floral bodysuit during practice for the 1994 Olympics, to the light blue turquoise she wore at the 1991 US Figure Skating Championships – there's plenty of 90's nostalgia to inspire your look.

The Wasp
When released in 2015 Ant-Man was a critical and commercial success. This year Ant-Man and the Wasp upped the ante with more action, light-hearted comedy, and a greater focus on Hope van Dyne as The Wasp.

In the latest film Hope inherits a prototype Wasp suit and mantle from her mother. When equipped with the Wasp suit Hope can shrink down to a few centimetres, fly around with her wings and fire bioelectric energy blasts.

Now you can feel empowered in your own Wasp costume. When equipped with the complete jumpsuit, goggles and wings, you can fight your way through hordes of bad guys with the grace and elegance of Hope herself.