Melbourne has taken out Sydney and Adelaide as Australia's most liveable city, according to expats and migrants living in Australia.

These findings come from the WorldFirst Australian Liveability Ranking, developed by global leader in international money transfers WorldFirst. WorldFirst commissioned the survey of 755 expats and foreign-born people living in Australia to vote on Australia's most liveable city.

The survey respondents were made up of people born in the United Kingdom and the Republic of Ireland (30 per cent), China, Hong Kong, Singapore, Japan and Korea (10 per cent), India (eight per cent), the Philippines (five per cent), North America (five per cent) and New Zealand (two per cent).

Despite being ranked in other independent research as Australia's third most liveable city, Adelaide was the fifth most popular among expats and migrants living in Australia, with just eight per cent of votes.

To find out why they chose a particular city, respondents were asked to select from nine factors that might make the city attractive to them. Social factors such as knowing people in the city (chosen by 27 per cent of respondents) and work opportunities (22 per cent) outstripped affordability (17 per cent), weather (12 per cent) and beaches and nature (11 per cent) as the most popular reasons for choosing these cities.

Half of residents (53 per cent) from the US and 46 per cent from Canada said they chose their preferred city because they know someone there. Meanwhile, half of Germans (53 per cent), Japanese (50 per cent) and Irish (50 per cent) expats picked the city of their choice because of work opportunities. 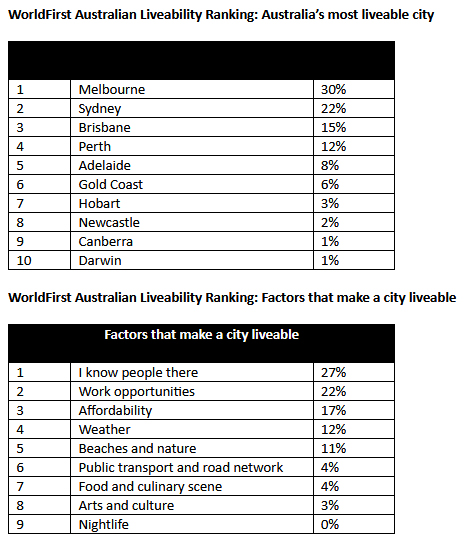 Public transport and road networks are less of a concern, with very few respondents (4 per cent) selecting this as a reason to choose a city. No respondents from any country except Canada (8 per cent) chose nightlife as a reason for a city's popularity.

Patrick Liddy, Head of Foreign Exchange at WorldFirst, said: "Even though most expats and migrants live in Sydney, Melbourne still outranked the Harbour City and Adelaide as Australia's most liveable city. It is interesting that social and work factors are more common than affordability and nature as a reason to choose a preferred city. Less of a surprise is that Australia's public transport and nightlife all scored poorly compared with these other factors.

"Despite the reason – whether they pick Sydney or Melbourne as the city to settle down in – WorldFirst helps expats and migrants settle in to Australia by helping them to reduce costs when setting up their finances here, or sending money back home. As it's fee-free and up to seven times cheaper than the big four banks, WorldFirst can help you to save thousands of dollars on international payments."

Interview with Patrick Liddy, Head of Foreign Exchange at WorldFirst

Question: Are you surprised that expats and overseas-born Aussies have named Melbourne as Australia's most liveable city?


Question: Do you think Melbourne weather is worthy of the most liveable city title?

Patrick Liddy: Melbourne has its four-seasons-in-one-day weather at times, but that doesn't seem to sway what expats think about the city. Expats and overseas-born Aussies picked their city of choice because of social and work factors, which Melbourne has plenty of to offer.


Question: What factors influence the most liveable city decision?

Patrick Liddy: Interestingly, knowing people there was the most common factor for choosing a city as liveable. This ranked higher for expats and overseas-born Aussies than work opportunities, affordability and weather. 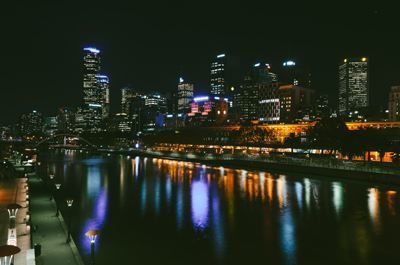 Question: Are you surprised that Adelaide came in fifth place?

Patrick Liddy: As Adelaide is ranked as Australia's third most liveable city in other research, we were surprised to find that it ranked fifth in the WorldFirst Australian Liveability Ranking. There are less expats and overseas-born residents in Adelaide than other cities such as Sydney, Melbourne and Perth, and given that top reason for choosing a city is because expats know someone there, this may be why Adelaide ranked low.


Question: Which is your favourite city and why?

Patrick Liddy: All of Australia's cities have their strengths. As a Sydney-sider, it's hard to say I don't love this city the most. However, other Aussie cities have many great things on offer for migrants and expats alike, that may be different to the country of their birth – such as the weather, work opportunities, beaches and an arts and culinary scene.


Question: What can Sydney do to take out Melbourne as the most liveable city?

Patrick Liddy: Sydney is a close winner, but its higher living costs for migrants and expats may keep it behind Melbourne. The Harbour City's public transport could also be improved compared to Melbourne's efficient tram network – something that Sydney is working on with our own tram being constructed. Sydney offers a beautiful harbour and many beaches close to the CBD that Melbourne just doesn't have, which is appealing for those born overseas.

Photo by Weyne Yew on Unsplash

Photo by Linda Xu on Unsplash