Tamma Beat You Down Interview One of Australia's most exciting pop newcomers, TAMMA, has released her glistening new single Beat You Down. After a rough few years of loss and devastation for TAMMA, real name Tammy Martin, and her family, Beat You Down feels like a true triumph over hardship. TAMMA has also announced a happy-go-lucky video to accompany Beat You Down, directed by Damien Blue (Slow Pulp) and filmed at the iconic Venice Beach in Los Angeles, California and will celebrate the release of Beat You Down with a performance at Farouk's Olive in Northcote on October 21.

Beat You Down is the ultimate pump-up song – one to bust out in the car as you head away on a road trip, when someone in your life is being a total jerk, when you are on your last dollar and your landlord kicks you out – but it's more than that. Sparkling guitars, hard-hitting pop percussion and a killer vocal hook from TAMMA lead the way – but the reason Beat You Down hits so hard is its deep roots in vulnerability. TAMMA offers insight into the deeply personal inspiration behind the track, saying, "As I was writing Beat You Down, I thought about my family and the hard stuff we have faced in recent years. I've had vocal surgery twice – however, losing my voice and identity seemed trivial after the tragic and sudden loss of my nephew Buddy in 2016. The loss threw me into an unknown and scary place, as I realised how quickly life can change and turn on you. Suddenly my main priority in life was to get my sister, family and myself through the grief and confusion."

TAMMA continues, "Music is my healer and I wanted to write something to make them feel uplifted – the way music does for me. I was thinking about my little nieces (and nephews) navigating through life at different ages and stages; it's confusing enough as a young one, but then trying to understand that loss on top of that is so hard. I thought about my own journey, what it's like to be a female today. Beat You Down came at the last minute, and it's a message for my nieces: if they ever feel discouraged or hurt, don't let it beat you down. Stay close to your loved ones…it's a message for anyone who needs a pick-me-up. Life's bigger than letting toxic people or trivial things get to you."

The clip for Beat You Down is soaked in summery nostalgia, as TAMMA and her friends skateboard their way around Venice Beach. It's fun and uplifting, pulsing with young energy and life, and the picturesque visuals fit in beautifully with the message of the song. TAMMA explains the concept behind the clip, saying, "Venice Beach is place close to my heart for many reasons, the warmth, the weirdness, the music, blue skies and palm trees, but mainly because of my awesome mates who live there, who also feature in the clip. We filmed some of it in their backyard in their amazing airstream caravan. I picked skateboarding because I wanted a visual representation where persistence and resilience pays off. I have always loved and respected skateboarding since I was a kid, it's an artform that requires courage to master it. You get physically hurt as well as rejected from society and little recognition, you eat shit and you get up again!"

TAMMA is set to perform Beat You Down and a bunch of never-before-heard tracks live for fans at Farouk's Olive in Northcote on October 21. Stoked to be showcasing her new music, TAMMA enthuses, "My shows are playful - I tell stories through my music that people relate to, we have laughs and an there is a lot of rawness and honesty in the room. My songs are catchy, warm, summary and soulful. This show will be performed with a live band which will be such a good vibe!" 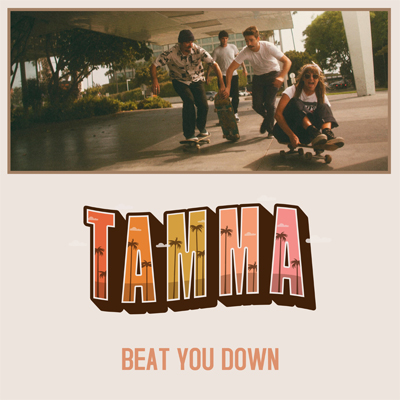 Tammy Martin: I write about personal experiences so depending on how I am feeling about something at the time the music can either be raw soulful piano ballads or upbeat summer soaked pop tunes.


Question: What inspired the track Beat You Down?

Tammy Martin: My nieces and nephews inspired Beat You Down. Because they are all in New Zealand and I am in Melbourne, I don't see them as often as I like and it was my way of sending them a message that I want them to carry with them their whole lives, I wanted to write an ear worm with a positive message that got stuck their heads, a message of persistence and resilience. Life is hard and not always easy to navigate through so when you feel discouraged it's a reminder to stay close to your loved ones and don't let trivial things or toxic people beat you down.


Question: Was it difficult writing Beat You Down after a rough few years of loss and devastation, for your family?

Tammy Martin: I initially was so grief stricken I couldn't even bring myself to sit at the piano. Not even music at that point in time was able to help the grief of losing Buddy. As time went on that little spark in me I used to have started to flicker inside so I started to get back on my piano. I went away for the weekend by myself in the countryside and that's where beat you down was born.


Question: Can you tell us about the video for Beat You Down?

Tammy Martin: I wanted an equally upbeat, strong visual representation to match the song so I picked skateboarding because I love and respect it so much. It is an art form that requires huge amounts of courage, resilience and persistence to master. You get physically hurt as well as rejected from society and little recognition for nailing a sick move after stacking it 20 times and being yelled at by some grumpy dude waving his fists in the air (laughs).

Tammy Martin: I do love performing my raw solo version of Beat You Down and also another song I wrote called Boys Of New York which will be released sometime in the new year.


Question: What should we expect from the upcoming show?

Tammy Martin: It'll be a pretty raw, authentic and an emotive live show, just the keyboard and me and a lot of storytelling and laughs. I can't wait to see you all there!

Tammy Martin: Well it's anyone who wants to be there because they feel connected to my music; a person who needs a bit of an escape and a lift.

Tammy Martin: I like both; they are both very different experiences to me. The live show is a bit scarier as you don't know the response you will get but with recording you and whoever is in the room recording with you are your audience and you have time to perfect things.

Tammy Martin: I am motivated by a strong emotion or feeling or situation at the time and that feeling of needing to get it out. My release is writing music, some people may go for a run or watch their favourite movie but mine has always been music.

Tammy Martin: Music is my life and I know it makes people happy. The motivation to go in to the music industry is to share my stories and connect with people through music to inspire and make them feel emotion.

Tammy Martin: Hmmm…. there are so many amazing artists I want to collaborate with but definitely Diplo, M-Phazes and Marshmello, are on the list.