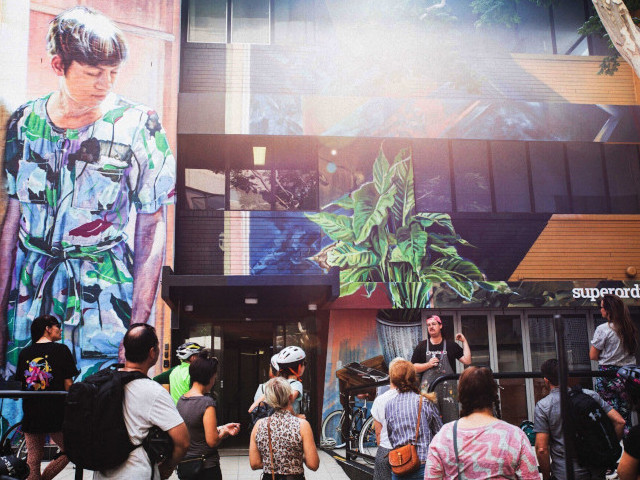 AUSTRALIA'S LARGEST STREET ART FESTIVAL RETURNS TO BRISBANE FOR 2022 WITH AN EPIC LINE-UP OF LIVE MURALS, ART EVENTS & WORKSHOPS.
Brisbane Street Art Festival (BSAF) has been pioneering Australia's street art festival movement year after year and will be returning May 7-22 with its largest program yet, presenting 50 live public murals and installations, a plethora of art events, and an interactive all-ages workshop program for the public.


International artists are back for the first time since 2019, adding their spice of culture to Brisbane's concrete jungle during the two-week festival. Street art masters will travel from the USA, Spain, Russia, Thailand, Indonesia and New Zealand to be a part of the event. They will join influential Australian and Indigenous players such as Sofles, Lisa King, and Rachael Sarra who will take this year's festival to the next level.


"Over the past 7 years, Brisbane Street Art Festival has contributed to placing Brisbane as one of the world's most significant street art cities, attracting International Artists such as Miss Birdy, Iñigo Sesma and Fivust to paint on our walls for 2022. International relationships allow us to share Brisbane with the world, as well as bring overseas art exhibitions and opportunities to the city", says Lincoln Savage, Festival Director.


Minister Fletcher adds, "The Morrison Government is pleased to provide the Brisbane Street Art Festival with $155,000 in funding under our RISE Fund, supporting 60 jobs and stimulating the resurgence of Queensland's arts sector."


"As much of the state recovers from COVID-19 and devastating floods, this festival will provide locals with a way to celebrate the vibrant and diverse arts and cultural experiences South East Queensland has to offer, whilst boosting local tourism and hospitality."


BSAF will introduce Superordinary Northshore as the central hub for the 2022 festival. The festival's large-scale warehouse Head Quarters is a grandiose space that will host a myriad of the program's finest art events and will sit amongst 12 mural activations from the festival schedule. Take a sneak peek at Superordinary Northshore during BSAF 2022, starting with the BSAF Opening Party on May 7.


"The Northshore Brisbane precinct is a perfect match for showcasing large scale significant artworks; the expansive waterfront, oversized buildings and immersive activations create a unique canvas for the immersive experiences that we curate and promote here. Nurturing an arts and creative community here is important and we hope the Brisbane Street Art Festival is another reason for locals and visitors to experience this exciting and emerging precinct of our river city.", said Economic Development Queensland, Project Director, Michael Bucknell.


Outside of Northshore Brisbane, the live mural sites will spread across iconic locations in the city - Howard Smith Wharves, Queen St Mall, RNA Showgrounds, The Valley Mall, and Southbank to name a few.


The Artists aren't the festivals only import this year, BSAF will host HKwall's Tools of the Trade exhibition straight from the hustle and bustle of Hong Kong. The exhibition frames the history of street art and graffiti through the lens of the tools that artists use to create their work. It highlights the ingenuity and the inventiveness of the artists by focusing on the techniques and tools that allowed them to produce their best works before commercial companies created products just for artists.


Tools of the Trade is a snapshot of the calibre of events, exhibitions and artist talks BSAF will host for 2022. This includes collaborations with Brisbane's Botanica- Contemporary Art Outside which sees a 90-minute Scribble Slam in amongst their stunning open-air art exhibition, and House of Iris with a Brisbane-themed photography exhibit that celebrates and connects the rising local photography scene. Don't miss the BSAF x Felon's Party which will showcase Brisbane's graffiti trailblazer Sofles' artwork on a beer can that carries an exclusive BSAF brew.


The workshop program offering has more than doubled since the previous year and welcomes the public of all ages and backgrounds to get involved and express themselves creatively. New additions to the public program include Yarn Bombing and an Intro to Tufting.


Lord Mayor Adrian Schrinner said the Brisbane Street Art Festival was an unmissable event on the city's cultural calendar and a chance to celebrate the local creative industry. "Brisbane's street art scene is growing because of this fantastic fortnight-long festival, which has spent years building Brisbane's profile as an internationally-renowned city of murals," Cr Schrinner said.


"Turning walls, bridges and buildings into a canvas, Brisbane is home to so many talented street artists and this festival is a chance to celebrate the creative sector while welcoming influential national and international artists to our city. This year promises the biggest program yet and I encourage residents to support our creative community by heading along to the exciting range of workshops, performances and new murals on offer."


BSAF acknowledges the traditional Custodians of the lands on which we live and work, in particular, the Jagera and Turrbal peoples whose country is where the festival now stands. BSAF understands that creativity and art have played and continue to play a very important role on these lands since time immemorial.


BSAF is thankful for the support received from the Australian Government through the Restart Investment to Sustain and Expand (RISE) Fund and is proudly sponsored by Brisbane City Council.