Snow White and the Huntsman DVD 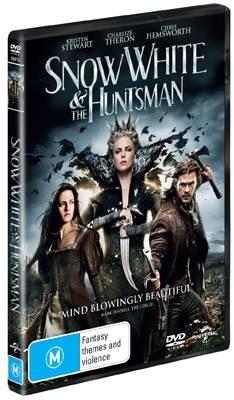 Snow White and the Huntsman DVD

Venture into a land of action fantasy, heroic battle scenes and visual wonder inSnow White and the Huntsman - coming to Blu-ray™, DVD and Digital Download from November 7, 2012.

Packed with pulse-pounding battles and mystical characters, Snow White and the Huntsman is a dark twist on a classic fairy tale. From the splendour of the wicked Queen's enchanted palace to the menace of the Dark Forest, the film is a breathtaking combination of harrowing beauty, epic battle scenes and jaw-dropping special effects.

In this spectacular action-adventure, Kristen Stewart (Twilight) is Snow White, the only woman in the land fairer than the evil queen Ravenna (Academy Award® winner Charlize Theron). Ravenna wants nothing more than to destroy her young rival, but she doesn't know that Show White has been training in the art of war with a huntsman (Chris Hemsworth) the queen dispatched to kill her.

Together with a handsome prince (Sam Claflin) enchanted by Snow White's beauty and power, they assemble an armed force to recapture the kingdom.

Blu-ray Special Features:
* A New Legend Is Born
* Reinventing The Fairytale
* Citizens Of The Kingdom - Fairest Of Them All: Snow White
* Deliciously Evil: Queen Ravenna
* The Huntsman
* The Magic Of Snow White And The Huntsman