Shania Twain From This Moment On 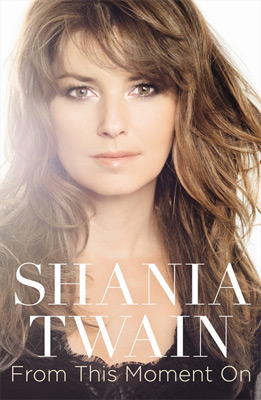 Shania Twain From This Moment On

In From This Moment On Twain takes readers through the events that have made her who she is and in the tradition of the best country music song she demonstrates how to keep life moving forward and ultimately circle back to love. Revealed here is a woman with a remarkable ability to keep her attitude positive in the face of great adversity; to rise above being dominated by blame, anger, and negative thinking; and to steadfastly focus her energy on enjoying life rather than spending it on figuring out the answers to 'why me' and 'poor me,' when faced with obstacles and challenges.

Born Eilleen Regina Edwards in 1965 in rural Canada, Shania Twain has lived a life rife with triumph and tragedy. By the time she was two, her parents had divorced, and by early childhood, her family of seven was often without food, at times living in filthy and cramped conditions. When her mother and stepfather were tragically killed in an automobile accident when she was twenty-two, she assumed most of the responsibility for supporting her younger siblings. At an age when most young people have only themselves to think about, Shania moved her family to a nearby resort where she began performing, supporting her brothers and sister.

Shania takes readers back to these crucial moments, revealing the difficulties she and her family faced. She writes of being discovered, time spent performing in Nashville, and her sudden, dramatic rise to stardom. She also speaks about her recent personal struggles and heartbreaks-struggles she's never discussed publicly.

Shania Twain rose to fame in the early 1990s with her debut album Shania Twain (1993), and achieved worldwide success with her 1997 album Come on Over, which became the best-selling album of all time by a female musician, and the best-selling country album of all time. A five-time Grammy Award winner, Twain has also achieved major success as a songwriter, winning 27 BMI Songwriter awards. Despite the fact Twain has released very few albums, she has sold over 75 million records worldwide to date, including 48 million the U.S. This is her first book.