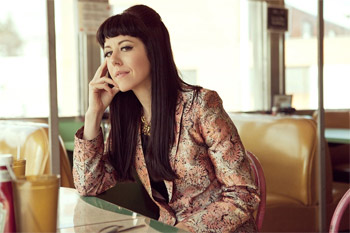 Ruby Rose Fox: I had just left a physically and emotionally abusive relationship and "He Hit Me and It Felt Like a Kiss" came on the radio. I said to myself, "Wow, that is NOT my experience." I wondered how many women had gone through what I'd experienced, and I felt like I needed to tell the story.

Ruby Rose Fox: Just that it's very hard and often confusing to navigate. I try to keep a beginner's mind about it.

Ruby Rose Fox: I co-wrote almost all of the songs on 'Domestic" with my songwriting partner David Brophy. During the writing of this album, I watched a LOT of documentaries on World War II (probably because I felt as if I had just been through a war). I'm always on the hunt for an idea, or phrase, or image that will lead me down the rabbit-hole that eventually surfaces as a great song.

Ruby Rose Fox: I try not to listen to a lot of music because I easily, and unconsciously imitate things I like. Lately I've been inspired by female surrealist artists, documentaries on the history of slavery and institutional racism, and Mob Wives. Oh, and of course David Bowie's Blackstar.

Ruby Rose Fox: We've been working on a series of music videos for this album and we just finished our fourth. I would love make a video for every song on the album.

Ruby Rose Fox: Many, many times but I'm really awful at just about everything but music. Ask any former boss.

Ruby Rose Fox: There is nothing like performing. Nothing.

Ruby Rose Fox: I heard Roy Orbison's "Only The Lonely" on the radio at age 4 or 5 and quickly declared that I wanted to be a "famous singer." I thought he was a miracle.

Ruby Rose Fox: It used to be the negative voices in my head. Luckily therapy has helped with that! Now it's just money. It's always money.

Ruby Rose Fox: Because a lot of my life is freelance work and art making there is really never a typical day.

Ruby Rose Fox: Meeting my collaborators and the members of my band. I really love them all so deeply and it's what keeps me sane.

Full Name: Ruby Rose Fox
Nickname(s): Rubytown, Rubykins, Rubicon, Rubles.
Star Sign: SCORPIOOOOOO
Favourite Food: Candy
Favourite Film: Dogtooth.
Favourite Actor: Daniel Day-Lewis
Person You Would Most Like to Meet: Leonard Cohen
Where did you grow up: Binghamton NY
First Job: Starbucks
Are you a Pub, Bar or Club kind: Bar
What Can You Never Leave Home Without: My Sanity
Who do you look up to: Bernie Sanders
Car I want to own: 1959 Caddy
Car I own: Bright Blue Toyota Yaris with about 11 dents.
On your wishlist: A national tour
Prized Possession: My grandmother's (also named Ruby Fox) white gold wedding watch. What is the first thing you think of when you wake up in the morning: "You're gonna die. Don't F*** it up."