Residual All For You Interview 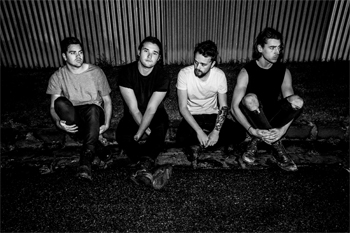 Residual All For You Interview

Alt-rockers, Residual have today announced their explosive new single All For You (available on July 15), the first taste off their new EP, Haunt, which is set for release on August 26. To celebrate their new tunes, Residual have announced a Monday night residency through August at The Workers Club in Melbourne as well as shows in Geelong, Bendigo, Ballarat, Warrnambool and Sydney all thoughout August.

All For You is a raw offering, embracing classic Aussie rock influences while remaining sharp, contemporary, and exciting. Swelling and receding in all the right places, lead singer Sam Burtt's voice carries confidently atop the intense, driving guitars and pounding drums. Riffs abound, All For You is emotive and compelling, as Burtt describes, 'All For You is about a relationship I was in - we had both recognised that the end was nigh, but loved each other too much to ever call it a day. However, that day came a day before we started tracking vocals. I remember sitting in the courtyard at the studio and giving the lyrics a pretty substantial re-write. This song is really about giving yourself to someone, despite the knowledge that it will soon end."

The video for All For You reflects this madness in stark, black and white fashion. It appears as though Burtt is the main character in a play he did not ask to be in; a series of scenarios are thrust upon him by indifferent stagehands, he eventually rebels as the song crescendos and everything comes crashing down. Working with young director Jesse Leaman (Lorne starring Guy Pearce) of Leaman Films, Burtt explains the inspiration behind the clip, 'We had presented a few conditions to him. We knew we wanted it black and white, long shots and an aspect of violence…In reality, the actor onstage is really breaking out of the play itself; he goes rogue and trashes the set. It's like Inception, only I'm a much better actor than Leo."

Residual have been hard at work on their new EP Haunt (their first release since signing with Sydney-based management ArowAgency), a diverse and thoughtful release that is set to propel the band onwards and upwards. Haunt boasts energetic guitar-driven jams, with just the right amount of piano-balladry to ensure ultimate balance – held together by Burtt's relentless and skillful vocal. Produced by Malcolm Besley (City Calm Down, Northeast Party House) and recorded in part at the renowned Sing Sing Studios, Haunt is one well-crafted collection of songs. Burtt enthuses, 'There's a real theme of the unobtainable that has seemed to filter through the EP. The songs really all focus on wanting what you can't have, whether that's love, happiness, or acceptance. The diamond, crystal-esque artwork is representative of something precious that as much as we may desire, we may never possess."

In light of their anticipated new tunes, Residual will be performing every Monday night through August at The Workers Club Melbourne. Excited to be playing gigs again, Burtt says, 'It's been a while since we've been properly playing shows. We've done a lot of travelling whilst simultaneously preparing for this release, so there's already a real sense of natural excitement for us – and if we do our job right, that will really rub off on the audience. We just want to show everyone how much growing up we've done."

Residual 'All For You' Tour

Josh Carter: This is always a tough question; I always struggle with it as simple as it is! I think it's hard to explain as everyone has different interpretations of us and music as a whole - you may have to check us out and let me know so I can answer this question better in future!


Question: What inspired All For You?

Josh Carter: 'All For You' was based around a situation our singer Sam found himself in his relationship just before we went into the studio to record this EP. They both knew that things weren't going all too well and they were probably going to end it at some point, but loved each other too much to follow through. In the end, they were both giving their all to give it the best possible chance of working out but also weren't naive to the fact it wasn't happening.


Question: What should we expect from the upcoming live performances?

Josh Carter: I think people can expect to hear a more fluent performance of our set, some new songs and plenty of energy. We haven't played a run of shows in quite a while due to focussing on the writing process, but we're beyond excited to get back on stage and play in front of people!


Question: Can you tell us about the motivation behind the video clip All For You (Watch it here: All For You)?

Josh Carter: The concept for the video came together over a period of about a week or so. We worked with a friend of ours, Jesse Leaman (Leaman Films), and gave him a few constraints such as wanting it to be in black and white, keeping it relevant to the lyrical content and having some form of violent aspect and keeping the shots longer as our deadline was fast approaching. Being the brainchild that Jesse is, he killed it.


Question: What was it like filming All For You?

Josh Carter: It was ridiculously fun! Super dangerous toward the end, but the 5am start was definitely worth it. Credit to Jesse's professionalism, he was just awesome to work with and knew what he wanted from every shot. We all had a ball!


Question: What was it like recording Haunt at Sing Sing Studios in Melbourne (Stream it here: Haunt)?

Josh Carter: Sing Sing is an incredible place. You walk in, and it's so warm and welcoming and then you walk through the halls and see the amount of gold and platinum records of Australian music royalty plastered all over the walls. Definitely gives you a bit of motivation toward your recording process! As soon as I saw gold accrediation of The Temper Trap's first album "Conditions" on the wall, I was just thinking "Yeah.. this place is sick!".

Josh Carter: All of our stuff is original and this question's also a tough one to answer! Our songs are an end result of us sitting together in a room for four hours a week, usually Sam bring's a melody or a verse or chorus to rehearsal and we take it from there and see how we go. We all listen to different sorts of bands and artists, Andy and I are quite the Michael Bublé fans.

name: Personally, my selection of music is is really diverse! One second I could be listening to someone like John Mayer, then flick it over to something heavier like Architects, and then back to someone relaxed, then I'll whack on some Kendrick.. Maybe I've got bipolar or something? Suppose we'll never know!

Josh Carter: Not at all, for me at least! I've spent some of the best times with these guys whether it's just hanging out or touring or being at rehearsal and talking smack for four hours. Sometimes the financial commitment can get a little much, but you look passed that because this is something we really want to do. As integral as money is, it's not the be all end all.

Josh Carter: Performing live by a long shot! Don't get me wrong, being in a studio and tracking and producing your next release is an awesome experience and something that you should cherish but you can't beat the feeling of getting up on stage and feeling everyone's energy and just losing your mind for an hour!

Josh Carter: I couldn't say! I think it's everything that I've explored musically from me picking up my Mum's old guitar when I was 12, to now. It's a thriving industry but it's also an ever-changing one!

Josh Carter: The biggest challenge for us and a majority of bands nowadays, is being heard! With social media playing the part it does, everyone has a platform to share and post their music and talents on the internet but that in itself can also be a problem. So many bands want to be noticed and listened to, but it's finding ways to stand out and be put out there that is the real challenge!

Josh Carter: My days vary, I work in retail casually so my days differ! But I do get to the gym most days, eat a lot and try and set aside time to write and be productive for the bands sake. If I don't stay busy I lose my mind!

Josh Carter: My favourite part is getting out and meeting people that are on the same page as you, whether that's playing shows with other bands or being able to meet people in the industry. It's cool to be able to share a mutual value with people who care about it as much as you.

Josh Carter: I think we'd love to have a female voice in some of our song's and Sam's range just doesn't cut it!

Personally, I'd love to collaborate with Ryan Tedder from OneRepublic. He's a phenomenal singer/songwriter and has had success with OR but has collaborated with people like Beyonce and Adele among others so it'd be interesting to see how that would go!

A few others would be purely bucket list options: John Mayer, Dallas Green, Isaac Slade from The Fray.

Josh Carter: Residual was something that Sam came up with. I think it reflected the exploration we'd done as musicians throughout our teen years with different bands, people and genres and that it all kind of resulted in us coming together to form this band. It seemed fitting to try and sum all that up into one word, and Residual did that quite well I think!